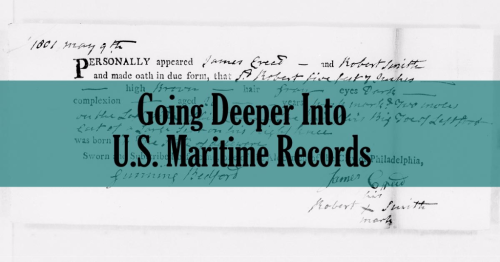 The War of 1812 was less than a year underway. The high seas and even the coastal shipways were a dangerous place for the United States to be conducting commercial shipping. Almost no ships were bound for foreign ports because of the federal embargoes put in place by the government. An American captain and his crew knew that if they crossed paths with a British or French vessel, they very well might not come back. So what compelled men, like William Maran, a “free mulatto,” to ship out of Philadelphia during the war? Like many other seamen, William acquired his application paper for a seamen’s protection certificate from a public notary, in order to have proof he was a U.S. citizen when traveling abroad. This document and the date it was made serves as strong evidence that he was soon to embark on an American vessel for the purposes of coastal shipping or privateering. 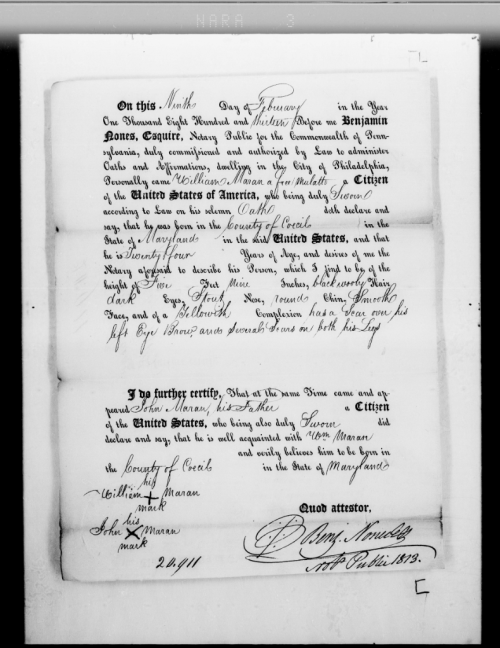 Even if William’s notarized document doesn’t directly explain the capacity in which he served for the U.S. shipping industry, his application paper provides a lot of great genealogical information. As stated, the notary listed William as a “free mulatto,” born 1789 in Coecil [Cecil] County, Maryland. Application papers required documentation or a witness to attest to the seamen’s identity and birth in the United States. In the case of William, his father John Maran was in Philadelphia and provided his mark on the document. What’s even more fascinating about the application, is the detail provided for William’s physical description. He was 5’9”, had black wooly hair, dark eyes, stout nose, round chin, smooth face, yellowish complexion, had a scar over his left eye brow and several scars on both his legs. Most protection certificates and applications will describe the hair, skin color, and eye color, but the nose, chin, and face descriptions are much more rare in these documents. William Maran and thousands of other African-Americans worked on American ships because the U.S. Maritime industry was a meritocracy. A captain hired his crew based on their skill and ability, not on race.

U.S. Maritime Records are very useful for genealogists who have ancestors in the shipping industry. My first maritime post for Legacy News was “My Grandfather Was A Sea Captain: Researching Maritime Ancestors,” which is a good introduction to where records are, but I wanted to take you deeper into the types of documents that are available for maritime research.

“Indexes to Seamen’s Protection Certificate Applications and Proofs of Citizenship”

Crew lists and articles of agreement are a roster of the crew serving on a vessel. They provide name, rank, age, residence, payroll information, and physical description (skin, height, hair). Sometimes they include the place of birth as well, but it may only list the name of the city alone, so be careful to not mistake it for another place (i.e., Portsmouth, Rhode Island vs. Portsmouth, New Hampshire). Many collections of crew lists are searchable on Ancestry and FamilySearch. If one of these documents isn’t available for a voyage, try searching the National Archives Catalog for seamen returns and portage bills in Records of the U.S. Customs Service, which at least list the name of each seamen and their wages.

Every time an American vessel went on a commercial shipping voyage and returned with cargo, the customs collector and other employees created a number of documents, like cargo manifests, entries of merchandise, and inspection reports. An important reference work for researching in shipping records is American Maritime Documents, 1776-1860 by Doug L. Stein, which explains all of the different documents created at the custom house. The National Archives at Boston created a glossary of terms for it’s finding aid for New England maritime records, which is available as a pdf file.

It’s important for genealogists to not overlook the fact that many of these documents feature original signatures by maritime personnel. The master and/or mate needed to sign under oath a number of documents, such as that the manifest of cargo entering the port was correct and legal.

Articles of agreement were signed by every member of the crew before embarking on the voyage and protection applications were signed by the applicant. Many American seamen frequently moved around the country and even the world. It can be difficult to track them using methods of genealogical analysis like age, next of kin, and location, so signatures may be the only clue that helps in confirming their identity. 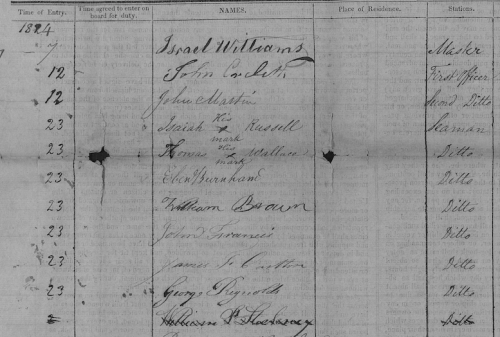 Fig 3. Articles of Agreement for 1824 voyage of Brig Friendship of Salem, Massachusetts. (FamilySearch.org).

Another reason it’s difficult to track seamen is because of the high rate of desertion and death during voyages. There are several sources which can help identifying these incidents, which will be the subject of an upcoming post.

Jake Fletcher is a professional genealogist, educator and blogger. He currently serves as Vice President of the New England Association of Professional Genealogists (NEAPG).

Are similar documents available for Great Lakes seaman in the 1800's?

Older records for great lakes maritime personnel can be found in the admiralty case files, located in NARA RG 21, Records of the U.S. District Court. If you have specific ports, try searching the national archives catalog for relevant entries and also don't forget to check local museums or archives for their maritime collections.