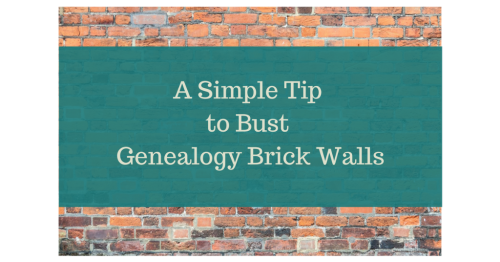 I was recently reminded of a simple yet effective tip for bringing down brick walls.

Yesterday one of my DNA matches contacted me suggesting that we might be connected through the Bair family. That got my attention because the Bairs are one of my brick walls.

Before I go any further, let me tell you that I am an ancestral DNA addict! Not because I think that there is a magic DNA bullet that is going to bring down my brick walls, rather because it might provide the simplest hint that I hadn't seen before. That hint, combined with good old fashioned genealogy research is what solves mysteries.

My new cousin shared her online Ancestry tree with me so that I could see where we might connect. She had already taken a look at my tree. She pointed out that "My Bair's were in Tuscarawas Co., OH, for a time, and Anna Bonfield that you have in your tree died in Tuscarawas Co." She continued, "I would think based on shared DNA our match would be a good ways back, so we just mightn't find it, but it still would be interesting to see if your Bair's relate to the Tuscarawas Bair's."

Anna Bonfield is not a Bair so at first I discounted that. Too hasty, of course! Anna is married to a Bair - my third great grandfather, Jesse Bair.

I decided to look at the information I had on Jesse Bair. Jesse Bair was born 11 Nov 1814 in Adams County, Pennsylvania. Further scanning of his life showed locations such as Stark County, Ohio; St. Louis, Missouri; and St. Clair, Illinois. Jesse's adult life is pretty clear to me but his parents and roots in Pennsylvania are a mystery.

His wife's death in Tuscarawas, Ohio was nagging at me.

So I went to my Legacy database and did a search for all individuals whose death place or birth place contained Tuscarawas. I didn't bother with listing towns or a state because Tuscarawas is such a unique name. I then selected Create List. 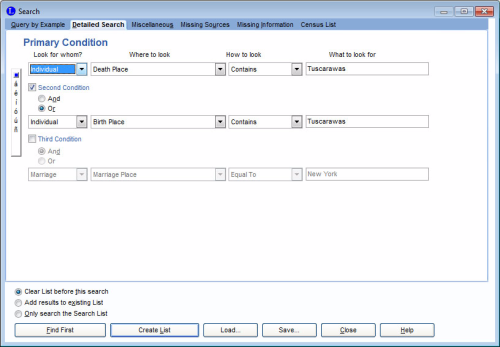 The results brought up, as expected, Anna Bonfield, but also her son James K.P. Bair. A quick peek at his profile showed that he was born in Dover, Tuscarawas, Ohio. I was so focused on my ancestors that I forgot to look at collateral relatives! James is the brother of my second great grandmother, Anna Elizabeth Bair (1850-1881). James' birth places my ancestors right in the same location as the ancestors  of my new distant cousin. Her Jonas Bair married and raised children in Tuscarawas, Ohio for twenty years before heading further west. It places him in the town of Dover exactly at the time my Jesse Bair was there.

What was my big mistake when researching my Bair brick wall? Not checking each location for other families of the same name!

A quick search in the 1850 census for Tuscarawas County, Ohio revealed over 150 Bairs! I'm only concerned with the oldest generation from Pennsylvania so I narrowed down my search to those born in Pennsylvania.  That brought 26 Bairs to my attention ranging in birth dates from 1791 to 1828. That date range means there's potential that Jesse's father could be hiding in plain sight in Tuscarawas County!

I haven't brought down my brick wall yet. My next task is good old fashioned genealogy research. I need to recreate the Bair families in Tuscarawas County. Yes, it will be a lot of work but if it helps me find parents or siblings for Jesse Bair then it will be worth it!

Marian Pierre-Louis is the Social Media Marketing Manager for Legacy Family Tree. She is also a speaker, writer and the host of The Genealogy Professional podcast. Check out her webinars in the Legacy library.

Cool results, Marian! Definitely a few steps closer to that door in the brick wall. Good luck.
Of course, I usually find when someone contacts me, that I wasn't even researching in that line, makes me slip and slide all over my tree! Fun, but...

Do you have any tips on people who were adopted? The Sate of NY, gave basic, but Catholic Charities has refused anymore details. I'm pretty sure on Mother, but Father is proving harder. How would a man in the early 1930's find his adopted daughter? Why? Especially if he was a poor immigrant.