News Home Legacy Webinars New to Legacy? Store
Register for Tuesday's BCG Webinar - Are You My Grandpa? Men of the Same Name by Rebecca Whitman Koford, CG
Geoff's MyHeritage experiment post #2 - Smart Matching, and a surprise at the end 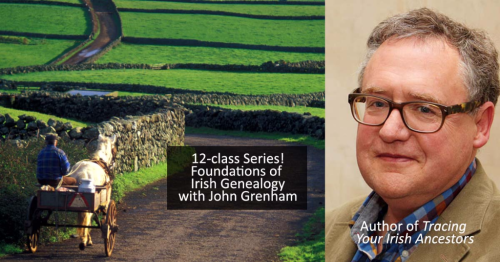 The most comprehensive beginning Irish genealogy course available online just got better. Originally a 6-class series,  the course has now been extended to twelve classes. It is taught by the foremost Irish genealogy authority, John Grenham. He is the author of the definitive Irish genealogy guide Tracing Your Irish Ancestors. The now twelve-class series introduces you to Irish genealogy and then progressively takes you through the major Irish records sources. Taught with humor and an authentic Irish accent, Grenham brings together Irish research in a way only the most knowledgeable Irish researcher can. 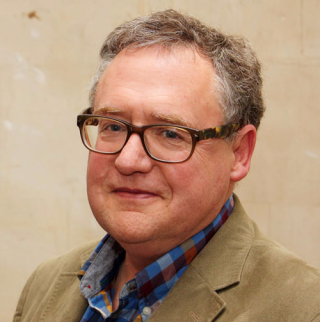 John Grenham came to Irish professional genealogy in 1981, as one of the panel of Irish Genealogical Office researchers and later worked for Hibernian Research. As in-house researcher for the Genealogical Office in 1990-91, he was instrumental in setting up the GO Consultation Service, the forerunner of the current Advisory Services in the National Library of Ireland and National Archives of Ireland.

He was Project Manager with the Irish Genealogical Project from 1991 to 1995 and later went on to develop and market his own genealogical software, 'Grenham’s Irish Recordfinder'.  He ran the Irish Times/Irish Ancestors website from 1998 to 2016. It now runs on his own site. In 2005, he was the first Genealogist-in-Residence at Dublin City Library and Archive. He is responsible for developing most of the heritage databases on databases.dublincity.ie.

He was awarded a fellowship of The Irish Genealogical Research Society in 2007 and of the Genealogical Society of Ireland in 2010. Among his publications are the standard guide to Irish genealogy, Tracing your Irish Ancestors (4th ed.2012), Clans and Families of Ireland (1995),Generations (1996), “The Genealogical Office and its Records” in The Genealogical Office (1999), Grenham’s Irish Surnames (CD-ROM, 2003),The Atlantic Coast of Ireland (2014) and numerous articles and columns in the UK magazine Your Family Tree. He wrote the “Irish Roots” column and blog in The Irish Times between 2009 and 2016. The blog is now at www.johngrenham.com/blog. In 2011 and 2014, he was co-presenter of the Irish television show “The Genealogy Roadshow“. In 2014, 2015 and 2016, he delivered a ten-week diploma in family history course at City Colleges in Dublin.

These join the original 6-classes in the series:

We're working hard to give our webinar subscribers the educational classes they need to maximize their genealogical research!

All twelve of these classes are bonus classes in the webinar library. The webinar previews are always free for non-members to watch.

Because of the destruction of almost all 19th-century censuses in 1922, census substitutes have taken on an unnatural importance for Irish research. This talk gives an overview of the range of records involved, moving along the spectrum from things that are somewhat census-like to strange beasts that are nothing at all like a census, but still highly useful. 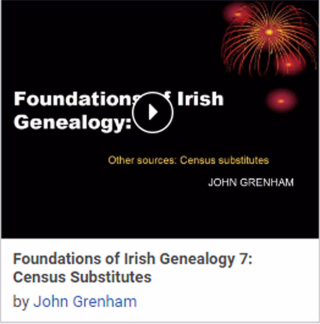 Foundations of Irish Genealogy 8 of 12: Newspapers

The usefulness of Irish newspapers as a research tool has been completely transformed by digitization. The talk outlines the main geographic areas covered by newspapers since the 18th century and provides a guide to online access, as well as some very useful offline sources. 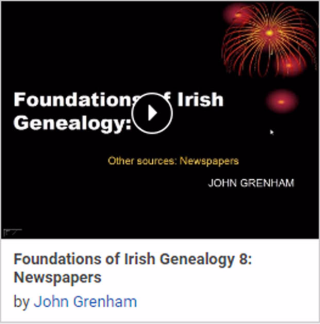 Foundations of Irish Genealogy 9 of 12: Wills and Directories

Both of these sources concern those with at least some property to their name, and both are now much easier to search online. The talk details relevance, locations and access, online and offline. 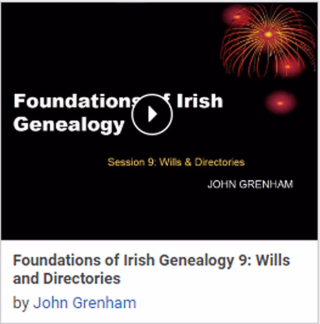 Foundations of Irish Genealogy 10 of 12: Registry of Deeds

Since 1704, the Registry of Deeds in Dublin has been providing legal registration of property transactions, often recording precious extended-family information in the process. The LDS Family History Library has a full set of the records up to 1929 on 2686 microfilms, but they are woefully misunderstood and underused. The talk covers the nature of the transactions, the individuals involved and the main routes of access, with examples and images of the records. This talk also covers the Genealogical Office. 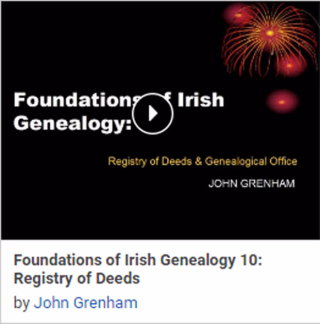 Foundations of Irish Genealogy 11 of 12: The Valuation Office

Griffith's Valuation is the best-known 19th-century Irish census substitute. But the published Valuation itself is only the tip of the iceberg. Before publication, a huge surveying operation produced mountains of documents, most now available online, and after publication revisions were produced continually up to the 1980s, providing an excellent source of information on possible living relatives. The talk details the creation of the records, their locations and access, online and offline. 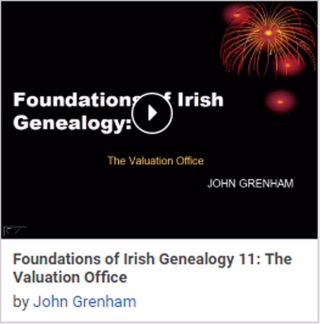 An overview of the most important occupational sources for Irish genealogy, with a large part devoted to the records of Irishmen in the British Army. 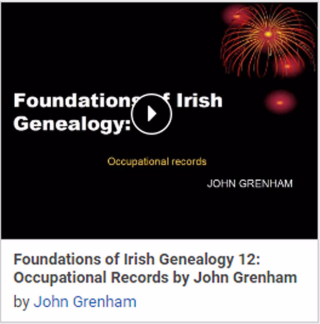