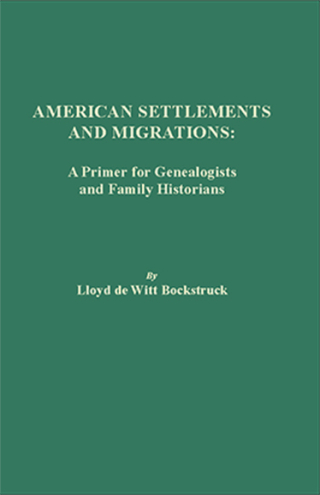 Brand new in 2017 and now available in the Legacy Family Tree online store!

This book provides a synopsis of the original patterns of settlement and migration for the United States. Mr. Bockstruck discusses each of the 50 states, however, his emphasis is on the states and territories that were established between the colonial period and the middle of the nineteenth century. For each state the author examines pioneers’ places of origin, reasons for settlement, specific places of settlement in America, names of pioneering families, migrations within and between states, and more. Equally important, throughout the volume he names the key sources for further research.

The study of migration is inextricably intertwined with family history. By combining a knowledge of history and geography, therefore, the family historian can extend the family pedigree across the country. Every detail represents a potential clue to an elusive ancestor, from the name of a shipping line, port of embarkation, and clusters of fellow passengers, to the nature of soil available to the colonist, church membership, and status of roadways.
Some members of the family may not have ventured away from the ancestral home. Others went westward but did not continue as far as some of their kinfolk. They may have generated the records further inland that would enable the family historian to bridge an ancestral geographical gap. Finding earlier places of residence could enable one to determine the place of nativity of an ancestor. Following such paths could enable one to locate relatives who remained in the East or dropped off earlier along the migration route, thereby identifying the immigrant or colonist who founded the family in the New World and perhaps the ancestral home in the Old World as well.
The study of migration/immigration follows several principles. Firstly, one must understand the local history of one’s ancestral homes. For example, as late as 1950, the state possessing greatest percentage of residents of British descent was Utah. Why? Utah was settled by Mormons, and this relatively new religious group was mostly composed of New England Puritan stock. Moreover, that church’s first missionary efforts abroad were in conducted in the British Isles, and those converts joined them in Utah.
Secondly, migrations are also tied to similar climatic belts. Colonists and immigrants often sought out lands that were capable of growing the crops with which they were familiar, as in the case of Scandinavian settlement in Minnesota and the Dakotas.
Thirdly, migration rests upon forces that draw immigrants to a new home. It may also apply to those forces that drove them away from their home. In some instances both aspects may apply. For instance, more than 150,000 natives of Virginia were living in the states of the Old Northwest Territory in 1850—an area accessible to them and possessing terrain and sols with which they were familiar.
Still other factors impinging on migration and settlement include available modes of transportation, religious preference or ethnicity, economic factors such as famines and floods, and foreign wars, revolutions, and other aspects of statecraft. Bockstruck contrasts colonial migrations, for example, with those following American Independence. During the colonial period, individuals and groups moved from the southern colonies to the northern colonies, and vice versa. Until the 1750s, colonists utilized sailing ships as the primary mode of transportation between colonies. They did not move from the East to the West until after the French and Indian War, when the Braddock and Forbes roads were built to enable the military forces to go into the interior to challenge the French in the Ohio River Valley. Such roads were necessary to move heavy military equipment, such as canons, and materiel to the war front.
American Settlements and Migrations is arranged by region and thereunder by state. Each chapter outlines not only the events, persons, and forces that contributed to a state’s settlement but also offers untold clues to the reader’s own ancestors. Might an 18th-century South Carolina forebear have been part of the British expulsion of the French from Nova Scotia? Was your Welsh ancestor part of the Pennsylvania migration to work in the Knoxville, Tennessee mining industry? Your Irish Famine-era ancestor was living in Boston in 1860, but is the gap in his genealogy attributable to the fact that he might have entered North America through the Canadian Port of St. John, Newfoundland. These are just some of hundreds of possibilities Mr. Bockstruck gets you to consider. His new primer may be just the clue finder you have been looking for.

Regular Price: 18.95
Webinar Subscriber Price (must be logged in at checkout): 18.00
Related Webinars 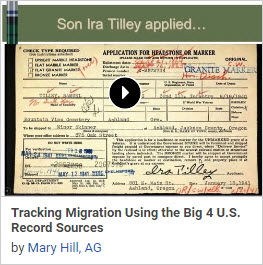 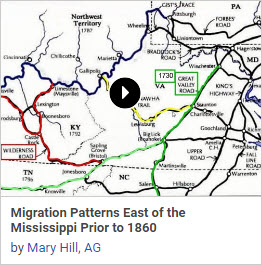