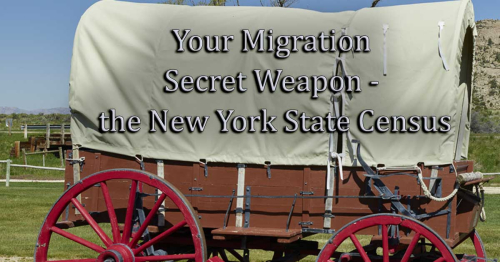 Those of us with westward migrating ancestors know how difficult it can be to trace people from their destination to their point of origin and vice versa. Even harder is finding the short stops along the way.

Many genealogists have learned to use the United States Federal Census as a clue to migration. By looking at the birth location of children in a migrating family, we can often determine some of the stops a family made on their journey westward. The only challenge is that the Federal Census is only enumerated every 10 years. That's a big gap!

New York played a big role in the lives of migrating families. Families who originated in New England often passed through New York, often stopping there for a few years before moving on. New York residents as well joined the migration west heading to Ohio and beyond.

The Trouble with New York

The challenge for many researchers is that the trail goes cold in New York. Vital records for most towns in New York state didn't start until the 1870s or later. If you have New England ancestors traveling west this come as a cold shock when you're used to vital records going back to the 1600s. Researching in New York is frustrating to say the least.

All is not lost! You were on the right track when you used the U.S. Federal Census. While we may not have the advantage of New York vital records we do have the New York State Census.

Each of the census years asks for different information, of varying value to genealogists. It's the 1855, 1865 and 1875 censuses that I want to bring your attention to. These three censuses asked for the county of birth. If
your ancestors are making stops within New York before moving on, this information is invaluable in tracing their steps.

In addition, the three censuses indicate if a person owned land and the 1855 census mentions the “years resident in the town or city”.

An Example in Action

One of my "challenging" families is David Allen, his wife Mariah and their five kids. Between a common surname, transcription errors and migration I was fit to be tied tracking down this family.

The 1855 New York State Census showing the David Allen family. Please note the image has been altered to show the headers directly above the family listing. Ancestry.com

This tells me I can place the family in Jefferson County, New York at least up until 1844. They are in Lewis County from about 1845 to no later than 1854. They arrive in Oswego County in time for Charles’ birth around 1854.

But there’s another clue. Column 13 – “Years resident in this city or town” – shows that the Allens have been in Volney, Fulton City for 2 years thus changing their likely arrival date in Oswego County to 1853. Column 20 – “Owners of land” – indicates that the Allen family did not own any land.

This one census helped to clear up where the family started and where they stopped along the way in New York on the travel west. It gave me new locations to search for new records. By 1860 the family had moved on the Manlius, LaSalle County, Illinois.

If your family traveled west during the mid-nineteenth century be sure to check the 1855, 1865 and 1875 New York State censuses (available on Ancestry.com) to find the clues to solving their migration mysteries.

Unfortunately the Allen family remains a bit of a mystery for me. In the 1880 US Federal Census I find a David Allen, Maria Allen and son Charles Allen of appropriate ages in Faribault, Rice County, Minnesota. But I also find in a different 1880 census a John Slocumb, Elizabeth Slocumb and a widowed Maria Allen living in Port Huron, St. Clair County, Michigan. A Michigan marriage record indicates that a Libbie Maria Allen born in Lewis County, New York married John Slocumb in 1877. It will take a bit more digging to determine which is my Allen family!

For help researching your New York ancestors see our New York series by expert Jane Wilcox in the Legacy library!

Marian Pierre-Louis is the Social Media Marketing Manager for Legacy Family Tree. She is also a speaker, writer and the host of The Genealogy Professional podcast. Check out her webinars in the Legacy library.

I, too, have found the NY state census records to be invaluable. One of my huge brick walls is John Jones from Wales. Born in about 1820 in Wales, I have no idea how his parents are and I did not know when he had emigrated from Wales and immigrated to the United States. the NY State Census helped me with that. I still don't know the date of immigration, but the 1855 NY State Census told me that he was 32 years old in 1855 and had lived in Utica NY for 26 years. So he immigrated as a child between the ages of 1 and 6.... approximately (because we know that ages are often wrong on censuses.) The 1855 NY State Census also told me that he was a naturalized citizen. I have discovered a lot of information about John and his wife Sarah and all of their children thru the various NY State Censuses that I did not get from the Federal Censuses !!!

Also check censuses for the Utica area for anybody named Jones, born in Wales. You have a good shot at this!

My proposed great great grandfather moved from Vermont to St Lawrence Co. NY one year before great grandfather was born and he was out of the house before 1830. In 1840 something. Only evidence is his place of birth was 1850 census

Sorry about the last two sentences before. In 1840 something he arrived in Ohio and married. So moving the time his parents did I can't prove the most likely ancestor

Your experience is quite common. I had an ancestor who followed that same path but ended up in Erie County. Thank goodness at least you had the 1850 census!