I can almost remember the day when I thought land records weren't all that important. I'm so glad that was decades ago and is a distant memory. And with what I discovered today, it reinforces the fact that land records must never be overlooked in our genealogical research.

This 1778 deed, in which Jeremiah Brown and two of his sons sold land to Simeon Potter, was crucial in proving that Jeremiah was my Nathan Brown's father. Marian Pierre-Louis discovered and explained its use in this webinar. 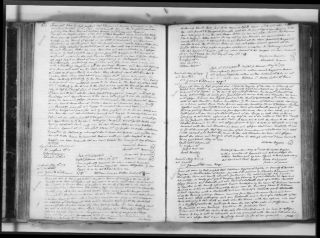 We did not know it then, but this very same deed, just today, solidified the theory that this Jeremiah Brown's father was Esek Brown. Yet nowhere in the deed did it mention Esek.

Today I located a 1759 deed where a Jeremiah Brown was given land by his father, Esek Brown. Was this my Jeremiah Brown? If so, then I've now confirmed that his father is Esek Brown. But this could easily be a different Jeremiah Brown. Comparing the 1759 deed with the 1778 deed answers the question.

I first thought to plot the land boundaries and comparing their shapes, but my DeedMapper 4.2 software hadn't yet arrived in the mailbox. So, I created a table in Microsoft Word to compare the key details of each deed. 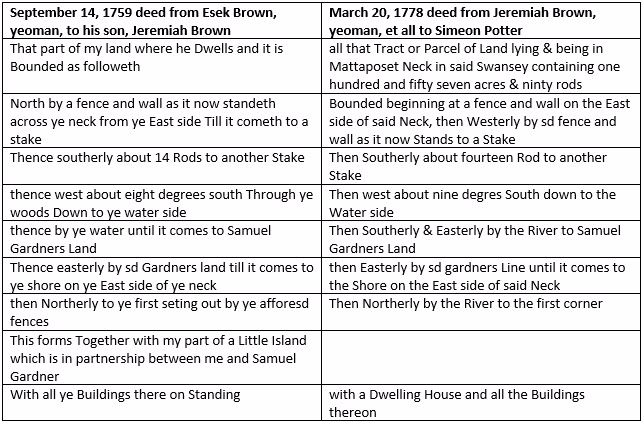 Remarkably, although the deeds were written about twenty years apart, they both describe the same land. The land Jeremiah was selling in 1778 was the same land that he was given - by his father Esek - in 1759.

Who was my Jeremiah's father? Esek Brown - the land records prove this.

By the way...the mail just arrived. Guess what was in it? My DeedMapper 4.2 software. Today just keeps getting better and better.

Well, Geoff, I will have to admit to not using land records very much. One reason is I haven't found many. However, this post has convinced me to begin looking even harder. I've used probate records a lot and most recently Civil War pension files that I've finally obtained. Good work and thanks for sharing.

I'm also a believer when it comes to searching deeds for evidence of relationships. Deeds helped me trace my Bishop line back five generations in Massachusetts Bay Colony, back to the immigrant ancestor, Edward Bishop in Salem Village, Essex County. I will forever be grateful to Family Search for filming, then digitizing and making available for free on line these wonderful Massachusetts records. One 1762 mortgage deed even listed the four sisters of my 4th great grandfather William Bishop. One of those sisters hasn't been mentioned in any other record source that I've found. What great sources these deeds can be, linking people from county to county and breaking down brick walls. Some of the details of my success with this research are in my blog, bridges2yesteryear.blogspot.com in the post called "Love Those Deeds!".