How the new Legacy Cloud prevented a disaster 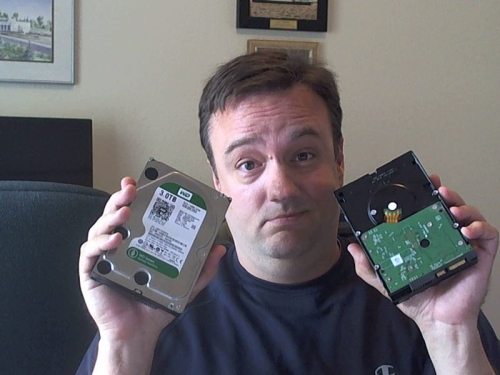 Shortly before I took this selfie with two of my computer's hard drives, I smelled computer smoke. That's never good.

After years of trying to convince me to upgrade my 28" wide screen monitors to a new 49" curved 4K Ultra HD Samsung screen, my friend Ken finally got his way. Here it now sits next to my what-I-thought-was-a-big-enough-monitor. 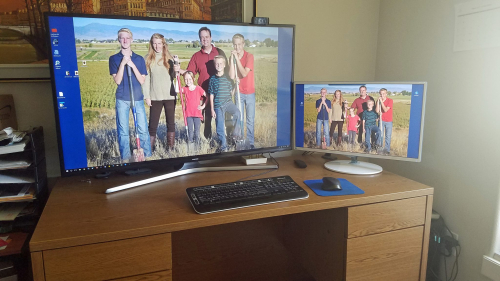 It's so big, I actually have to turn my head left and right, up and down to see everything. The best part - I can read an entire land record without having to zoom in at all. 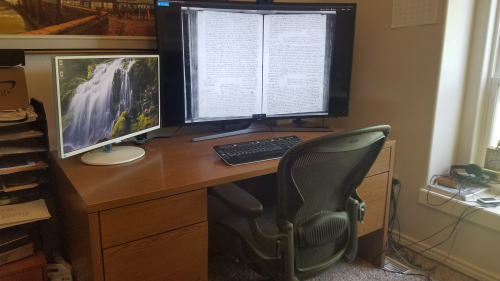 It hasn't all been fine and dandy though. There's been a little big of a lag with the cursor on the large screen. After a few days of trying to get used to it, I couldn't take it anymore. I tried adjusting the resolution, the refresh rate, and more but nothing would resolve the problem. So at the recommendation of others, I purchased a new video card. I've installed these in the past; I knew what I was doing. Apparently not. When I closed everything up and pushed the power button, I heard a soft audible "puff" sound followed by the fragrance of computer smoke followed by nothing. There was no life to my computer.

Initially, I did not think it was too big of a problem, but I did have our "Discover the new Legacy 9 software" webinar the next day. I took the computer in where they investigated the problem. I returned a few hours later. They said they had good news and bad news for me. I don't remember the good news because the bad news they shared was really bad news. Both my 2TB data hard drive and its 3TB backup hard drive were "toast." These drives stored all of my pictures, genealogy files, financials - everything.

The first thing I thought of was my Legacy Family Tree software. Then I smiled. Just hours earlier, I used the brand new Legacy Cloud to backup my family file to Legacy 9's new offsite, secure server. My genealogy was safe! Fortunately everything else was also safe - I've been using BackBlaze.com's backup service for years. All of my 1.3TB of data should be backed up there too.

In the end, I had the computer service people quickly build me a computer good enough to host Friday's webinar. After installing Legacy 9, I used the "Restore from Legacy Cloud" tool which restored my Legacy file perfectly. I'm still waiting for the hard drive I ordered from BackBlaze.com to arrive with the rest of my data, but thanks to Legacy 9, I had immediate access!

The damage could have been a lot worse. Thanks to a good backup strategy and to the Legacy Cloud, I'm back in business.

A great and well-timed demonstration of how Legacy's new feature saved your bacon, as well as why having more than one backup source is essential. Glad to hear it all worked out for you.

OMG, Geoff, even with Legacy9 Cloud backup and BackBlaze, you must have had a horrible sinking feeling in your stomach! I am so glad it's working out for you--and a clear warning to everyone to make sure they have back-ups, back-ups, back-ups.

I find WizMouse a plus with multiple monitors! https://antibody-software.com/web/software/software/wizmouse-makes-your-mouse-wheel-work-on-the-window-under-the-mouse/ I just added a 3rd monitor today and everything works like a charm! Glad you had everything backed up!

My concern about using cloud storage is that while it is professionally operated, secured, and made very reliable, any cloud is subject to some forms of attack and/or loss of access. Icloud was just a small example. The internet can be taken down; ISPs can be knocked off line; cyber warfare/hacking is becoming commonplace; and, I don't care who you are, companies do go out of business or can be taken over. There needs to be a way of saving everything both offline locally and on the cloud. I don't want all my data lost because some hacker found a way to destroy it, the cloud operation suffered some unexpected catastrophe, or because the internet has been disabled.

If your hard drives were not destroyed you can access them and download all your info, docs, photos etc. onto another hard drive. I use old hard drives from discarded or damaged desktop computers and laptops for storage. Never discard your old hard drives.
The items you would need is very cheap and available on Ebay & Amazon.

Another great lesson - thanks again Geoff. One small question remains in my mind. If this was a selfie was it a voice controlled shutter.......

Personally I think everything is run on smoke. Since when the smoke shows up, the item never works again! :)

My concern is always the security of my back up. Will my data be offered to others or used by Legacy or it's sister companies?

Ian - no, your data will always be yours. We will not have access to it.