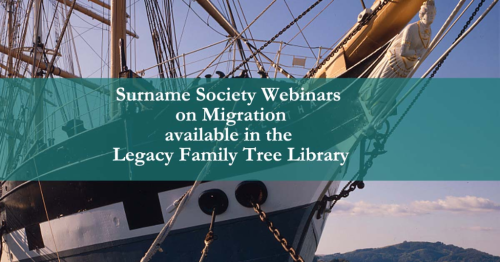 Legacy Family Tree Webinars is honored to make available four presentations that were delivered during the Surname Society 2017 annual conference and general meeting. The presentations touch on the theme of migration and tracking your ancestors across the globe.

The four talks include:

About the Surname Society

The Surname Society was founded as a not-for-profit entity by a worldwide group of experienced genealogists. The vision of the Society is to connect like-minded people by providing up-to-date facilities which enable members to share knowledge, data and good practice with others regardless of where in the world they are. The Society is entirely online and focusses on single surname studies to meet the needs of researchers in the world of family history and genealogy as it evolves in the 21st century.

Americans have always been a nation on the move.  There were many reasons that brought them here, and once they were here they didn’t stop.  Something “out west” always seemed to beckon them. In this class, we will study the major trails used for migration, and the ethnic groups that predominately used those trails.  Also included are major waterways, such as rivers and canals, that enabled people to move swiftly to their next destination. The class will finish with a case study showing the reverse migration of one of Peggy’s families, and the use of census and court records used to track the family back to its first landings in America. 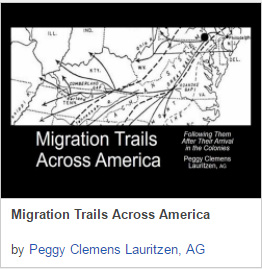 Following a Surname Around the World: Tracing Emigrants and Immigrants by Janet Few

This class will suggest various avenues that can be explored by those who are in the process of giving their study a worldwide flavour. 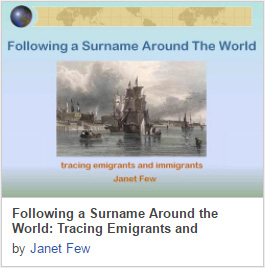 Australian Immigration: Colonial and Beyond by Helen Smith

Australia was founded on emigration, initially forced emigration by the convicts to later the free settlers and post WW2, refugees and displaced person from Europe. Prior to Federation each colony was in charge of its own immigration schemes. This has produced a wealth of records, a case of following the money. Records were kept when the governments had contributed to passage costs. Living DNA launched in September 2016 offering the most detailed genetic ancestry test currently available to the general public. Working in partnership with the leading scientists in the field of human genetics the Living DNA test enables anyone to explore their genetic ancestry using the most detailed methods available. Currently, this fine structure analysis provides an individual with a breakdown of their ancestry across more than 80 global geographic regions, and over 20 regions within the UK. 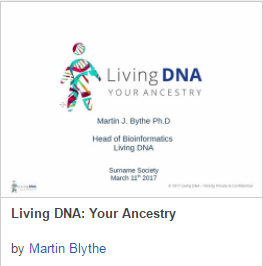