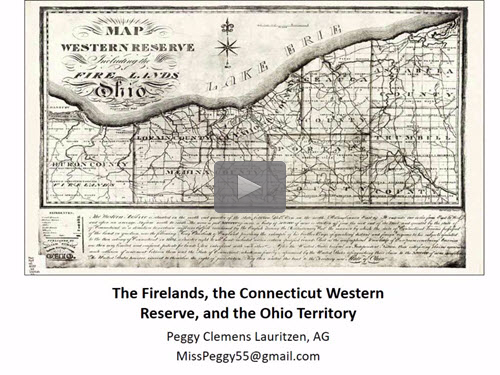 The recording of today's webinar, "The Firelands, The Connecticut Western Reserve, and the Ohio Territory" by Peggy Clemens Lauritzen, AG is now available to view at www.FamilyTreeWebinars.com for free for a limited time.

The northeastern lands of Ohio are aptly named “The Firelands”, and “The Western Reserve”. How did they come to be called that? And, what connection do they have to the northeastern states? “Ohio fever” brought a lot of settlers to the state following the Northwest Ordinance of 1787. A section of Ohio named “The Western Reserve” will be of particular interest to those having ties to Connecticut.

View the Recording at FamilyTreeWebinars.com/BCG

If you could not make it to the live event or just want to watch it again, the 1 hour 17 minute recording of "The Firelands, The Connecticut Western Reserve, and the Ohio Territory" is now available to view in our webinar library for free for a limited time. Or watch it at your convenience with an annual or monthly webinar membership.