Playing Hide and Seek with Records from Burned Counties

If you need to find a marriage record in Jackson County, Mississippi dated 02 November 1828, where do you look?  You look in the Wayne County, Georgia probate records of course!

Catherine Sheffield married her first husband Ignatius Grantham in Wayne County, Georgia on 09 October 1810.[1] Ignatius was a bit of a scoundrel so Catherine filed for divorce in 1825 in the Marion County, Mississippi Chancery Court.[2] They had been living apart for some time because Ignatius is enumerated by himself in 1820.[3] Of interest is that Catherine’s soon to be second husband William Seaman was listed as her “next friend” in the court papers and acted as her representative.

Back in Wayne County, Georgia, Catherine’s father West Sheffield died leaving behind an informative estate file. Catherine’s now second husband William was getting some serious payouts from the estate and not only is there an affidavit from Catherine Seaman attesting that she is in fact the daughter of West Sheffield there is a marriage record from Jackson County, Mississippi copied into the Wayne County, Georgia book proving that William is Catherine’s husband.[4]

William C. Seaman had married Catherine (Sheffield) Grantham on 02 November 1828 in Jackson County, Mississippi but the Jackson County courthouse in Scranton (now part of Pascagoula) burned in 1875. The papers that were in the safe (deeds and money) were spared but the marriage records were not.[5] If William and Catherine’s marriage record had not been copied into West Sheffield’s estate papers there would have been no record of it. 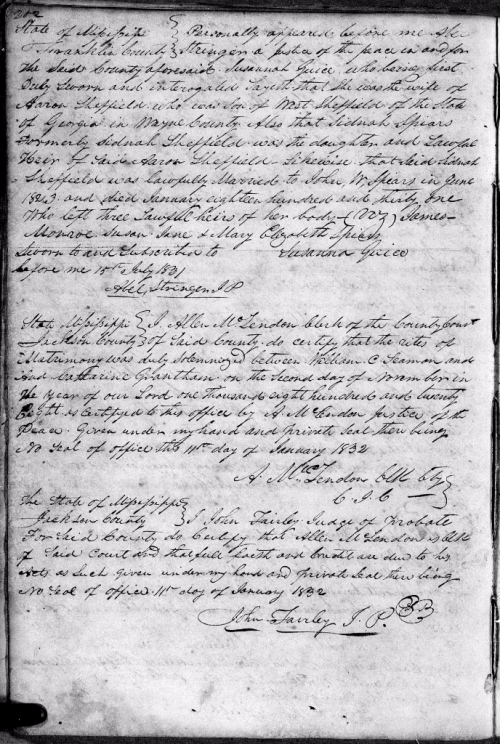 Here is another example of finding records from a burned county in an odd place. On 8 November 1851, Silas Simmons applied for bounty land based on his service in the War of 1812.[6]  In the bounty land file there were Perry County, Mississippi court documents dated 01 November 1851, 24 January 1853, 18 April 1855 and 31 January 1856. Silas and a few witnesses had to appear in court to prove that he was in fact the same Silas Simmons that fought in the 10&20 Consolidated Louisiana Militia before he could be awarded his bounty land warrant. Silas also assigned (sold) his warrant to someone else and then applied for another 40 acres. So what is so special about all of this? The Perry County Courthouse burned on 14 November 1877 with a complete records loss.[7]  These court documents shouldn’t even exist. If I had merely looked at the land records on the Bureau of Land Management website and not ordered the actual bounty land file I would have never discovered this.  I have included one of the documents below.

If you have ancestors that lived in burned counties be sure to check for documents in all the places that your ancestor lived. And don't forget to order the original documents instead of relying on the digitized records.

What amazing finds have you found for your ancestors? Tell us in the comments.

[2] Mississippi High Court of Errors and Appeals, Drawer no. 65, Case no. 15, Catherine Grantham vs. Ignatius Grantham, 21 February 1825; Mississippi Department of Archives and History, Jackson. The case was originally filed in Marion County.

Michele Simmons Lewis, CG is part of the Legacy Family Tree team at MyHeritage. She handles the enhancement suggestions that come in from our users as well as writing for Legacy News.  You can usually find her hanging out on the Legacy User Group Facebook page answering questions and posting tips.

Certified Genealogist is a registered trademark and the designation CG is a service mark of the Board for Certification of Genealogists®, used under license by Board certificants who meet competency standards.

Thanks for posting this. I believe I have connections to Ignatius Grantham. Looking forward to finding out.

Ignatius is a very interesting person. I need to take the time to learn more about it. I came across him by accident when researching another Grantham.