Pathway to My Sicilian Heritage

Researching my Sicilian heritage feels totally different than my English heritage. It is so much more than taking my heritage back generation after generation. It is about identity, culture, religion and history. Understanding the elements of the lives my ancestors led.

I have often given talks or written about my Sicilian heritage and genealogy and it was recently that I wanted a different image to accompany an article about my Orlando One-Name Study, which is registered with the Guild of One-Name Studies. On Facebook, there had been several genealogical bloggers that had used Scrabble boards to create something for their genealogical surnames. I was intrigued and located my childhood scrabble board. 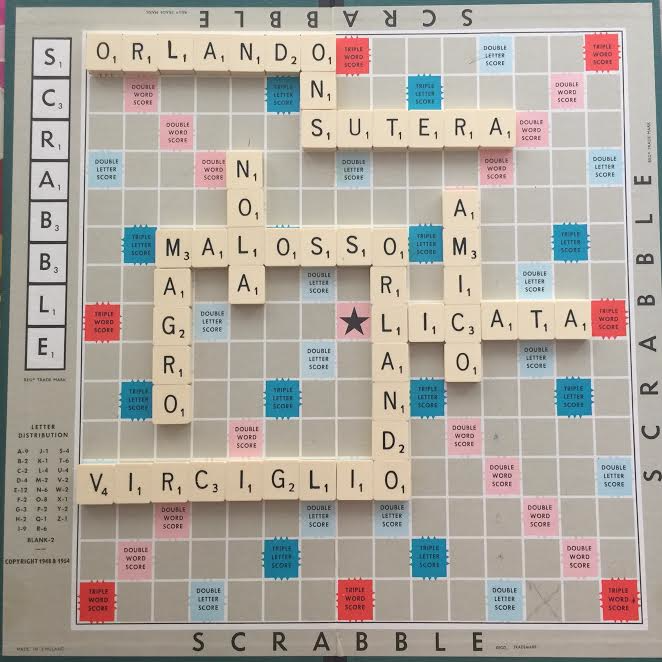 It was the moment when the Scrabble board was complete, the surnames slotted in and the place of my One-Place Study, Sutera in Sicily was added that something occurred to me.

These were my people. And they were in this place. I printed out the picture. This Scrabble board for reasons I cannot explain speaks to me. Each of those surnames connects to me and they all focus on a small town in the Caltanissetta region of Sicily. Truly, it is a powerful image and I cannot explain why.

Researching in Italy and Sicily is not for the faint hearted. It is frustrating for a variety of reasons. When I first started the quest into my Sicilian heritage there was no internet. Everything was painstakingly researched at the place the family came from. There was no email. There were letters written with a pen and placed in an envelope with a stamp on. Those letters were perhaps responded to, if the local officials had time and could understand English. The best way was to write in Italian, but even that did not always yield a response.

I live in England and I know a branch of my Orlando family from Sutera migrated to the United States, along with thousands of others who left Italian shores in search of a better life. I examined passenger lists and located my Salvatore Orlando. He left Sutera in 1913, but there had been migrants to the United States from Sutera since the early 1900’s. The passenger lists were filled with surnames from the Scrabble board, Licata, Nola, Magro, Malosso and Orlando.

The quickest way to ensure that I did not revisit those early documents was to extract all the entries that listed Sutera as the place of origin or birth and to extract all Orlando references. Of course, at the time I was undertaking this process for efficiency, but I suddenly realised that I had two distinct and yet overlapping studies; a One-Place Study and a One-Name Study.

I am defined by so much more than the three circles shown here.

Of course, there are some people that were not tracked, simply because the passenger list gave the place of origin as Sicily or Italy.

We are now in the modern genealogical age. The internet has shrunk the world to the size of a matchbox and I am grateful that my research can be attained easier, although there is so much not online. Researching Italian and Sicilian heritage is just as slow, just as problematic but there are things we can do that will enable us to be better family historians with a better understanding of our ancestors. Exploring our ancestors in their time and in their place.

In 2007, I started to explore DNA and organised an Orlando DNA project at FamilyTreeDNA. Whilst the growth of the project has been slow I am pleased that the project exists and just recently I was contacted by someone who shares a match to the Amico family from Sutera with me.

If you have non-Anglo ancestry why not consider looking at your research from the point of view of a surname study or a one place study.  Try to look at the names and places as I did with my Scrabble activity. Find ways to connect with your ancestors. Learn more about the places they came from and you'll be on your way to understanding your heritage and bringing those surnames to life.

Have you researched your non-Anglo ancestors? Share your stories with me in the comments!

Julie is the writer and developer of the successful "Book of Me, Written by You" program, which has been popular as a series of workshops delivered to both professionals and historians, in addition to undertaking research for some clients. Julie's book Tracing your European Ancestors is to be published in 2016 by Pen and Sword Books. When Julie is not working or researching her own ancestry she can be found reading, exploring the many National trust properties within the South of England or writing at her blog – Anglers Rest.

May I have permission to copy your Scrabble board idea? I think it would be great for my patronymic names in Sweden.

Hello Allie, Thanks for asking. I would be delighted for you to copy the Scrabble idea. I saw a post by Miriam Robbins earlier in the year & that inspired me with this design. That is what social media is all about. Come back & let me know how you get on.

Great piece and I love the Scrabble board, too. I have Tuscan (Massa Carrera/ Aupean Alps region) and Sicilan heritage. I have been shy to begin researching due to the language barrier. I've concentrated on my Irish heritage because although it is difficult at least I am mostly dealing with English. You have inspired me to try it. In fact one of your surnames is similar to mine. My GG grandmother was a D'Amico. Wonder if your Amico and my D'Amico could be the same surname? She married a Musumeci. Which is my great grandmother's surname. My Lambruschi family are the ones from northern Tuscany region
Thanks again for a great article.

Hello Barbara, I am glad you enjoyed the article & that you are inspired! I have another post coming up, so stay tuned! Yes, I believe that Amico & D’Amico are one and the same. Over time, most dropped the D’ but some retained it, others lost the apostrophe (‘) and become Damico. My own dropped the D’.

This site is a for Italian distribution maps http://www.gens.info/italia/ and whilst it does not give huge amounts of information, it does show where the surname is concentrated; we all have to start somewhere! The dark colours on the map output show a high concentration of the name, the colours becoming lighter with few instances right down to a pale yellow & then white for none.

Hi Julie,
I was intrigued to find you as the author of an article in my Legacy news today, although we know each other from the Anglo-Italian Family History Society.

Thank you for the Scrabble idea, which I think I'll try for my Ghirardani ancestors from Villora, Varsi, Parma. I found that most families in the village are related and have thought for years that I should register Ghirardani as a ONS since my surname is rare and all are related.

Hello a Daphne, lovely to hear from you. I registered the Orlando name with the Guild around the same time we were talking about forming the Society. For my way of thinking, a One-Name Study is perfect for Italian & any other European name because whilst the commitment is to research globally, a study grows over time. I would recommend joining because you probably record all instances of the surname anyway. There are several others researching Italian names, one is a fellow member of the Anglo Italian FHS. Feel free to contact me if I can help etc.