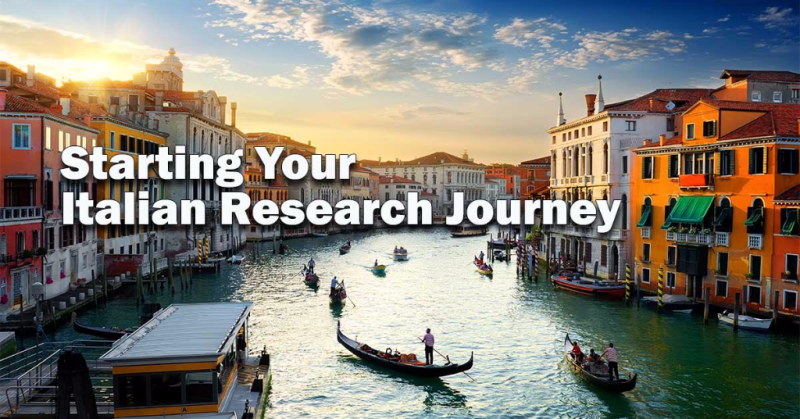 I won't pretend researching Italian and Sicilian ancestry is easy. It isn't, but if you do your ground work in much the same way as you build a house, from solid foundations you will be off to a good start.

So here are a few top tips to consider:

Before you start researching in earnest start reading and discovering the country; read books about the history and culture, explore the religious festivals. By doing these things you are building your research foundations. You are exploring your ancestor's country, their religion and what was important to them.

You probably know or have an idea of when your family entered the United States. Perhaps you have searched passenger lists but cannot find them. Here are a few more considerations: 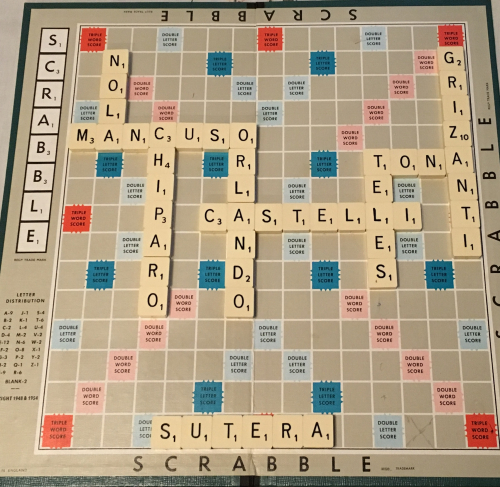 If you read the post Pathway to My Sicilian Heritage you will see that I mention the place my family hailed from, a small place called Sutera in Caltanissetta. Sutera is a rural community which meant the pool of people that an individual could marry was pretty small. What I found is that the same surnames kept popping up as individuals married and upon researching further I would discover the same surnames appearing in my research. Ironically my maternal line does something very similar in England!  Marrying family members or marrying into the family of in laws meant that what assets there were could be retained within an extended family group.

Over a decade ago I discovered that Sutera had been the focus of a thesis by an academic in the United States. I ordered the book and eventually it arrived. I also contacted the author and asked her for any insights and did she have any material that had not made it into the published works. She did and since then we have corresponded several times. Explore that possibility. While Sutera is not large, it has been included in a number of books. Explore every possibility.

The biggest challenge is the language unless of course you are fluent. I find researching my Sicilian ancestry takes me three times as long as my English research, but I also yield more information from records. FamilySearch has done a sterling job of getting records online, for some I cannot see the actual record, but a transcription. I can then search for the record on other sites and read it, using the established transcription as a way of checking and double checking my reading.  I have been reasonably lucky and between three sites I can often research and fill in the gaps.

Important sites for Italian and Sicilian research include:

Reach out to others that are either researching the same names or the same places or both. You never know where an email conversation will take you. Also consider a DNA test. Does a project exist? While surname DNA projects only exist at FamilyTree DNA (FTDNA) explore your options. Upload the results to Gedmatch. Italians are not especially interested in DNA, so it is not going to be a quick win, but test, because you never know!

Here are a few of my favourite resources:

Julie is the writer and developer of the successful "Book of Me, Written by You" program, which has been popular as a series of workshops delivered to both professionals and historians, in addition to undertaking research for some clients. Julie's book Tracing your European Ancestors is to be published in 2016 by Pen and Sword Books. When Julie is not working or researching her own ancestry she can be found reading, exploring the many National trust properties within the South of England or writing at her blog – Anglers Rest.

I would like to know why all books coming out like Starting your Italian journey always have people going to the United States.
I am trying to help a friend, whose family moved from Italy to Australia and did not go to the US.
especially his fathers army records. Every time I put his fathers name in search, his great uncle with the same name going to the US always comes up.

It would be nice to see books or help advising where to look for people coming to Australia from Europe.

My last name is Garrambone from Stigliano, Matera, Basilicata, Italy. I am searching for records from this town and currently wading through the FamilySearch materials both online and at the Local FHC. Many of the records I have found are actually tied to marriage processes and not necessarily single birth, marriage, or death documents. There are several variations of the name, but I have mostly encountered the one "R" version. My target right now is to find records for Egidio Garambone born around 1810 and married about 1832. All help in finding records for this person will be greatly appreciated.

Hello Doreen, I understand as I have a similar issue with Italians coming to the United Kingdom.

From about 1919 when the United States began to exercise controls on Italians migrating many chose to go to Australia instead. I have a family member who was one of three brothers that migrated. The first two to the US before the First World War. After the war the third brother wanted to join the other two but could not because of the new controls and restrictions. He
subsequently went to Australia but the families ties remained strong and and numerous family members travelled between the US and Australia for years. You mind find passenger lists showing the family travelling between Australia and the US.

You haven't provided a surname, date or location in Australia so I am going to be very general. The National Archives for Australia has a number of records relating to specific Italians and a number of general information which you might find helpful - http://www.naa.gov.au/search/searchresults.aspx?cx=006762012386158203175:uy8n1gpncg4&cof=FORID:9&ie=UTF-8&q=italian

Naming patterns are both a help and a curse for Italians, and as I am unsure how much of the material you have researched in Italy, but looking at the records for the family members who went to the US might help add further dimension to the Australian branch.

During the Second World War many of the Italians were interned in Australia as Italy was on the opposing side of the British and British territories overseas. There is possibly some records relating to that in Australia, or if the family had became Naturalised there will be a record.

Sometime ago I found a death record for a family member in Sicily. The document had said the person had lived in the US and I drew the conclusion that the person had died during a visit or had returned back to live with the family. Before I moved on though, I decided to look and see what else I could find. Had her husband remarried or had he died in the US with his widow returning back to Sicily? I came across the Naturalisation record in the US that confirmed that he had remarried and first his wife had died in New York. I called for the death record and went back to the records in Sicily. I had not misinterpreted what was said, it was the case the priest was keeping track of his flock!

With regard to searching you either restrict the search function to just search Australian datasets or leave it wide open. Of course doing the latter will yield a number of unrelated results to the actual person you are researching, but equally they might reveal something of interest.

My ethos has always been for European and Italian research leave no stone overlooked. That is one of the reasons why One-Name and surname studies is often useful as you seek to track all individuals with the name.

The problems you are encountering are why a great many members with Italian surnames (and other European names too) undertake Surname Studies as a way of trying to find "their person". In a time when only those who were financially well off were educated it was important to try and record the details and if it was spelt correctly that was a bonus!

The first thing I did after reading your message was to visit this site and insert your surname so I could get a sense of how common the surname was http://www.gens.info/italia/it/turismo-viaggi-e-tradizioni-italia?cognome=Garrambone&x=0&y=0

As hopefully that link shows the spelling with two R's does not suggest that it is a common name, trying again with one R reveals this http://www.gens.info/italia/it/turismo-viaggi-e-tradizioni-italia?t=cognomi-prov&cognome=Garambone&x=0&y=0 indicating that the spelling has changed over time which would expect. There is no definitive way of knowing which is the correct spelling but I would say that it has changed from one R to two.

I have searched this site http://www.antenati.san.beniculturali.it for you and sadly your area of research does not appear online but more are added all the time. Your ancestor has a very distinctive name and I would encourage you to track the surname as that may be something that leads you back to your ancestral line.

A quick search of Garrambone on Family Search for Stigliano (with no dates or first name) does ot produce lots of options, just 279 and I would recommend that you follow some of those folk to see if any of that matches with your ancestor. With such an usual first name, is this a name that occurs in later generations?
https://www.familysearch.org/search/record/results?count=20&query=%2Bsurname%3AGarrambone~%20%2Bresidence_place%3AStigliano~

I am sorry to not be able to give you more positive news, but I will keep having a think about your research and something else might occur to me later.

Thank you for your reply.
I am still slowly moving through films at FamilySearch (FS). They appear to be good, but most are associated with marriage and therefore do not come with an easy to digest listing or index on separate events. I am planning to create indexes in my FS search as I go along which will help me better able to read Italian cursive writing and make it easier when I have to return to a document as new names (relatives) are posted to my tree. It would be helpful to find someone (relative or not) in Stigliano who is doing family history research and would benefit by corresponding with another Italian in either Italian or English. Perhaps you know of someone?
Best to you
Mike