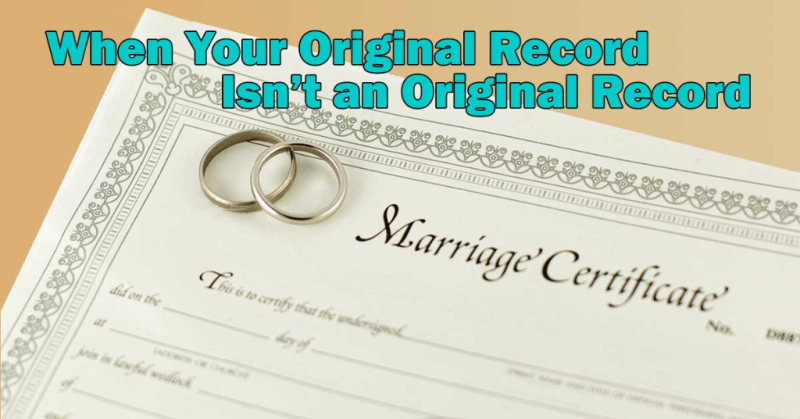 When you contact a county or town clerk to request a copy of a marriage record it is important to tell the clerk that you want a copy of the ORIGINAL record as it is in the marriage book/register. If you don’t, you might get this: 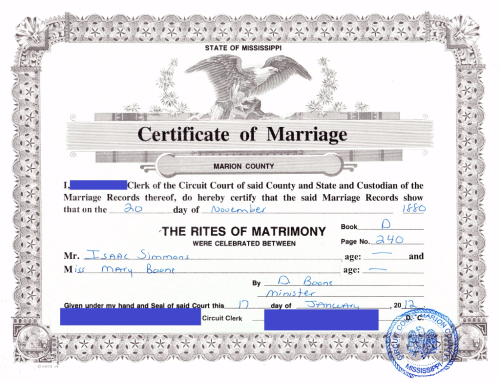 Here is the copy from the marriage book itself, Marriage Book D, page 240: 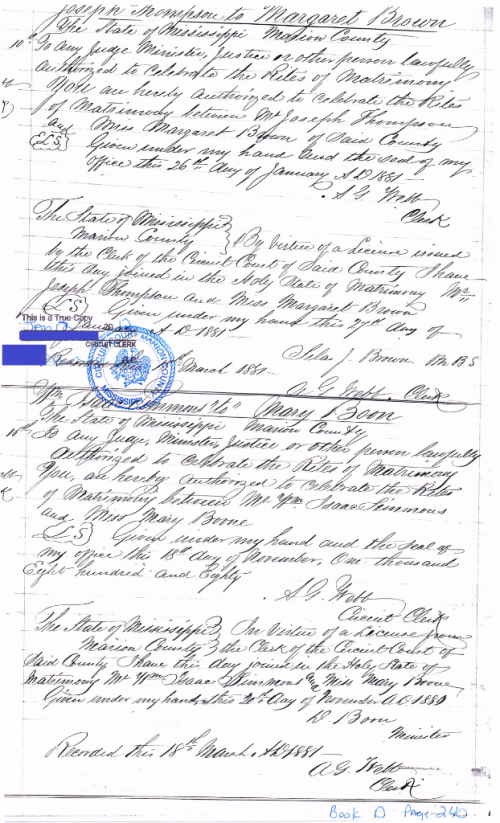 The clerk thinks he/she has done you a favor by copying the information out of the marriage book and putting it on this nice certificate but this isn’t the case. In the original record Isaac’s name is Wm. Isaac Simmons. The clerk totally missed Isaac’s first name. Notice that Mary is listed as Mary Boon (no e) as well as Mary Boone (with an e). Also notice that the minister is listed as D. Boon. This might not seem significant but it is. The clerk transcribed their names as Boone without noting the two spellings. Their surname was actually Boon with no e. D. Boon was either Daniel her father or Daniel her brother. Both were preachers as was another brother. The original record also tells me that they applied for their marriage license on 18 November 1880, two days before they married. It that earth shattering news?  No, but I still have a more complete picture knowing when they applied for their marriage license vs. when they actually got married. In this case it isn’t a big deal but what if there was a two month difference? I would try and find out why. The clerk’s name doesn’t appear on the transcribed certificate either. A. G. Webb could have easily been someone that I know since I am familiar with the entire community. This marriage puts A. G. Webb at a specific place and time and gives me his occupation.

I like putting a face to a name so here are Daniel Boon’s six remaining children out of 15 circa 1925. From left to right: Margaret Elenda (Boon) Hartfield, John Moses Boon, Elisha Boon, Thomas A. Boon, Mary Catherine (Boon) Simmons and Reuben Boon. 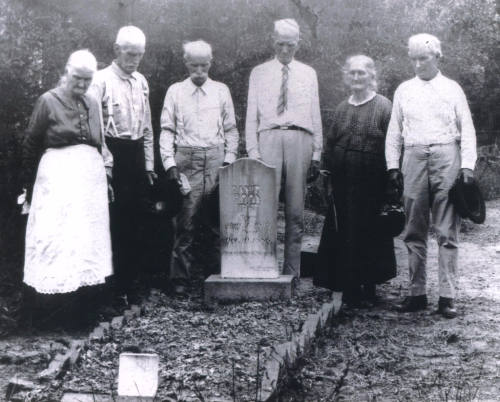 Michele Simmons Lewis, CG is part of the Legacy Family Tree team at MyHeritage. She handles the enhancement suggestions that come in from our users as well as writing for Legacy News.  You can usually find her hanging out on the Legacy User Group Facebook page answering questions and posting tips.

Certified Genealogist is a registered trademark and the designation CG is a service mark of the Board for Certification of Genealogists®, used under license by Board certificants who meet competency standards.

This is particularly important in Italian civil or parish records.

I have never had a court clerk copy information on a certificate. I'm do good getting a copy of the page in the record book. With the Internet providing so many sources and copies of actual records and record books. I look there for documentation before making requests from County Court houses these days.

More and more records ARE coming online (YAY!) but at last count less than 10% of the available documents are online. It will be many years before we have easy access to everything. Having said that, I always do a search at all of the available online venues first before I call/write the courthouse/repository. You just never know!

Just a note about sending for records. It is not always correct in the records.

I have a copy of my grandmother's birth registration where there was an error made in filling it out the day she was born. That was filled in with the date of birth as previous year on one line Only and the rest was correctly done, and the other dates on the page show 1908. However her date of birth is registered as 23 April 1907. When she was born in 1908.

This is a real puzzle for her as she tried to have it corrected by the correct channels when she was old enough and they told her to send them some money and they would do it. At that time of course she did not have funds so left it as it was.
The funny thing being that her sister was born on 28 March 1907, so they would have been rather late twins if the dates had been correct. (Her poor mother.)

On the good side she did know the correct date to tell all of "her family" and it was recorded in the old family bible so we have a record of the birth from that. I was actually the one who was passed down the family bible and now have that as a treasure to pass on.

That is an entirely different issue and a very complex one because as you say, the laws from state to state are very different.

Heather,
Another thing you have to watch out for are amended certificates where the amendment is on the back or as a separate piece of paper. Sometimes the clerk doesn't think to include the amendment. If you are lucky, the original will be stamped with the word Amended so that you at least know that an amendment exists.

I ordered a Birth certificate for my father from Pennsylvania (1918). They sent me a transcription of the original - not even on a fancy certificate- and the given name they cited was outrageous! As far as I know he was always Vernon Levere, but the BC I was sent claimed his given name to be Reachard.

I called several times and was told their policy is that the public has access ONLY to what I was given. I requested that they check that the transcriber did not move up a line or down a line in a ledger. I asked them to check if it was a twin birth (I had never heard that it might be a twin birth!) They claimed none of the above could have happened! The parents' names and birth date agree with all the other information I have, so it was, at least partially, the correct record.

Do I have any recourse in getting a copy of the original?

What did Heather's grandmother do about social security?

I have had the clerk place an event in the wrong century and it was mainly because I had seen the original record that I was able to document that. Also, I had a township clerk place an event in the [current] post office address (a nearby city) rather that the township in which the event actually occurred. These errors make it very difficult for a second researcher to follow up on your paper trail.

You may have to enlist the help of a local researcher. They may be more accommodating to someone that comes in person that can simply snap a digital photograph of the page, especially if it is a researcher they are familiar with. Their birth records may be so delicate that they don't want to try and photocopy them but might allow digital imaging.

It is so important to get copies of originals when possible. For example in my case I was able to get information on witnesses off a marriage certificate, which help me to recognize them as relatives in my family tree, and place them at a location in the timeline. The marriage officer also turned out to be an ancestor.

It is also useful to become familiar with state laws regarding local records. Some of the "rules" cited by local clerks are as they understand them from local practice and sense of ownership rather than any legal requirement. In one town I went to, I found out that the limitations were due to a former town clerk who simply didn't want to be bothered, and made up his own rules (learned by talking to a local historian). Succeeding town clerks followed his example without knowing it was not a requirement. The one I talked to was actually relieved, as she felt that people should have access to these materials. Otherwise, she said, why would they have been kept?