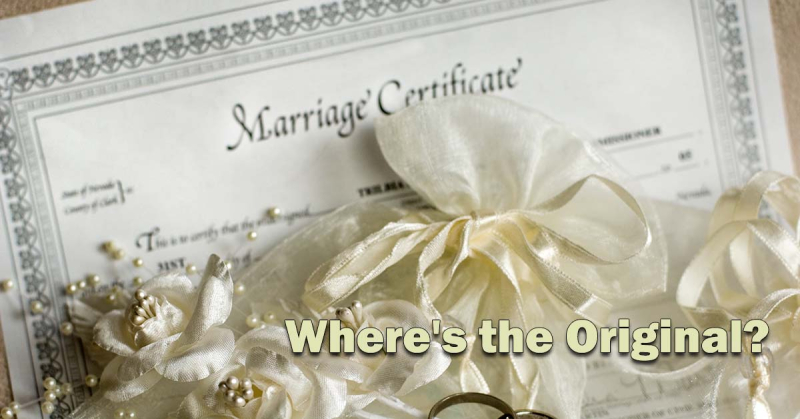 One of the golden rules of genealogy is that the original document is always best but what happens if there is no original? I have two examples for you.

Here is what I had written in my marriage notes for Eli Meredith and Martha McMichael:

Jane Doe* at the Pike County, AL Circuit Court Clerk's Office states that Eli and Martha show up in their marriage index but when she went to the marriage book itself to make a copy the page was missing. [*name changed]

I made that note probably 25 years ago. Back then I wasn't smart enough to try and find microfilm. I recently revisited this couple. FamilySearch now has the Alabama county marriage books online.  Look what I found. 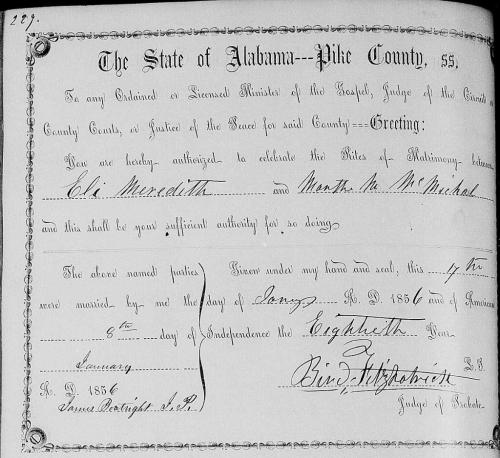 The Genealogical Society of Utah microfilmed this book on 29 October 1979 (before the records were lost) and in this case the microfilm is better than the original. I do want to add that as a general rule microfilm is as good as the original (and is considered an original for sourcing purposes) as long as you have no suspicions that the film was altered or doesn't represent the original faithfully. In many cases you will go to microfilm first. My second example is more dramatic.

I found the marriage of David McMichael and Sarah Cimbro [Kimbrough] in an index. I contacted the Greene County, Georgia Probate Court and they advised me that their earliest marriage records were lost including the one I needed (Murphy's Law). The marriage did appear in their official index. My next move was to see if the Greene County's marriage books had been microfilmed. They were microfilmed on 20 March 1957 so I thought I was on to something. I pulled up the microfilm on FamilySearch and found something that I didn't want to see. The earliest marriages had been copied into an index but the original book apparently no longer exists. The inscription at the front of the book reads:

"A Record of Persons Names who have obtained Licenses for Marriage — By Wm Phillips — Register of Probates for Greene Co."

The index is all in the same hand (Mr. Phillips). I don't know when the index was created but before the book was lost. As a double check I called the Georgia State Archives. All they have is a copy of the Family History Library film. Here is a snippet:

Greene County, Georgia, Marriage License Index 1786-1810, McMichael-Cimbro, 1789; digital image, FamilySearch (https://familysearch.org : accessed 22 December 2017); The original marriage bonds, licenses, and solemnizations have been lost. At some point the probate clerk created an index of these marriages which now serves as the only official record.

You always want to see the original record yourself (digital image/microfilm considered original as long as you are confident it is a faithful copy) but sometimes it simply isn't possible. There are other scenarios to consider. It might be cost prohibitive to get an image of an original document especially if a repository requires onsite research. Some documents have not been microfilmed and the repository deems them too delicate to be handled. If this is the case, those documents are usually in the queue to be digitized by expert archivists. If I use an index as my source I will explain why as part of my citation so my readers will understand why I used what I did.