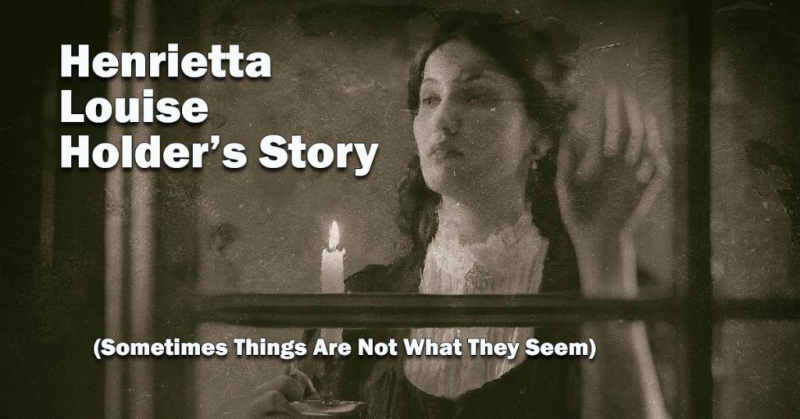 Henrietta** was the sister of one of my direct ancestors. I wanted to gather her basic information and hopefully write a short bio on her. What I found was a complete dead-end.

In 1870 and 1880 Henrietta was living with her parents and siblings. I found her 1882 marriage to Douglas Crandall so I expected to find Douglas and Henrietta as a married couple in the 1900 census. Instead I found Douglas listed as a widower and living with his parents. Not good.

By 1910 Douglas is living with his second wife Ella. The census records clearly show that Henrietta was dead, right? Douglas is buried in the family cemetery but there was no marker for Henrietta nor is she in any of the other local cemeteries. Unfortunately, her death was before this state mandated death certificates. Her bio was a bit sparse but at least I knew who her parents were and who she married. I also knew she had three children with husband Douglas because two sons were listed on the 1900 census with their widowed father and a daughter, who had died at age 4 months, was found in the family cemetery.

The breakthrough was an email from one of Henrietta’s direct descendants. She had seen some of my Holder memorials on Find-A-Grave and guessed I was tied to Henrietta’s line somehow. She asked if I happened to have a photograph of Henrietta. I told her I didn’t but I sent her two photos of Henrietta’s brother. The return email was a shocker. Henrietta didn’t die until 1931, at least 31 years later than I had thought. Henrietta had been declared "insane" in 1899 and was sent to the state hospital where she remained until her death. This was totally unexpected and it again showed me not to assume anything. This descendant sent me copies of the court documents (ex parte order and service*) as well as Henrietta’s complete medical file from the state hospital. It was an absolute goldmine of information.

*An ex parte order, in this context,  is an order for involuntary commitment. It is any temporary order issued at the request of one person when the other party is not there. You will also see these as restraining orders and temporary custody orders. The service is when the sheriff serves the order on the person named, again, in this context it was when the sheriff took custody of Henrietta and delivered her to the state hospital.

Henrietta is buried in the state hospital cemetery in an unmarked grave. I was now able to order her death certificate. I went back to the county clerk and requested Douglas and Henrietta's divorce decree, clean copies of the ex parte order and service, and Douglas and second wife Ella's marriage record. I had so much more information about Henrietta and was able to write a nice bio. I still have a lot of unanswered questions but you never know, another unexpected email might hold the answers.

**All names have been changed at the request of Henrietta's grandchildren

How old was she when her husband committed her? Women were committed to the insane asylum for going through menopause.

I found the exact same situation in my family! I always wondered whether the diagnosed insanity was actually either postpartum depression or caused by the loss of a child. Once committed in those days I imagine it wasn't easy to be released.

I can't prove it but I am guessing postpartum depression. She was committed less than one month after her last child was born.

A number of years ago, I helped extract data from probate records in Texas. I was surprised how often women were sent to the mental hospital by their husbands only to be released a few months later by a son or on the death of the husband. It was an easy way for a husband to get rid of a wife he did not want back in the late 1800's and early 1900's.

From my experience, most places will not give access to commitment papers. I had a similar experience in Oklahoma. I found land records that told me she was committed and then died. Because of this I was allowed access but it didn't tell me why or anything new. She had supposedly shot at her husband.

Court records are almost always public record, however, the medical records I received are not. Henrietta's granddaughter was able to obtain them because she is a direct descendant. I actually tried because I wanted a "clean copy" (a copy right from the source). I was thinking that maybe since it had been 68 years since her death the hospital would relent. They didn't.