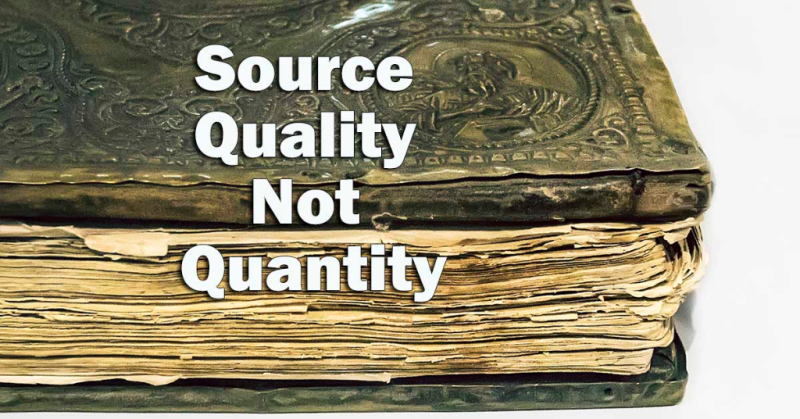 No one explains this concept better than Elizabeth Shown Mills:

Citing a source is not an end to itself. Our goal is to rely only upon the best possible source. In the research stage, we record every source consulted, regardless of our immediate opinion of its value. When we recognize that a source is deficient or that a better source might exist, the better source should be sought and used. When we convert our raw notes into an interpretive account, we want our information and conclusions to be supported by the evidence of the highest quality possible. Toward that end, source citations have two purposes:

I am going to give you a few simple examples to further explain this concept and then I am going to show you how to record all of this in Legacy.

Let's say you consult an online state death index and you find your ancestor's date and place of death. You record the online index in Legacy as your source. You then order a copy of the death certificate. You receive it in the mail and now you record a new source. When you print a report do you want both sources to print? The answer is no. You will use the state issued death certificate as your source for the person's date/place of death because when you weigh the evidence the certificate trumps the index.

Let's say you have the following sources for a person's date/place of birth; death certificate, obituary, and their tombstone. The informant for the death certificate, the obituary, and the tombstone is probably the same person so I wouldn't even look at these as three distinct sources (assuming all three agree). You would record all of these sources in Legacy but would you want all three to print in a report?  No.

Let's say you are using the 1880, 1900, 1910, 1920 and 1930 census to show a couple was married. Do you want all of these census citations to print for their marriage. No, one is sufficient. Even better would be to find their marriage certificate and then use that.

In Legacy there is a way mark your sources so that even though you have recorded everything that you have consulted you can restrict what actually prints. I am using Asa Clark Brown [1] in the Sample File that comes with Legacy as an example. Open Asa's Assigned Sources screen. There are five sources for Asa's Birth. Asa's Bible is the best source. The other sources listed support the evidence contained in the Bible but the Bible is what I will use as my source citation. 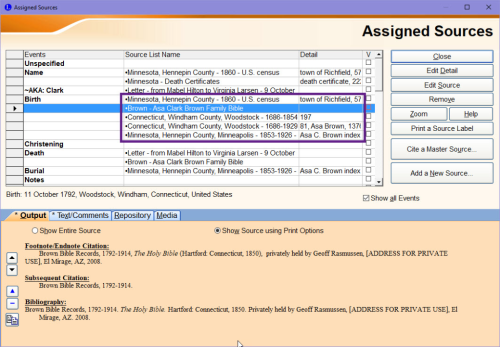 Click Edit Detail (NOT Edit Source) for the first citation that you want to restrict and then UNcheck the box to include the citation on the report. Do this for all of the citations that you don't want to appear. 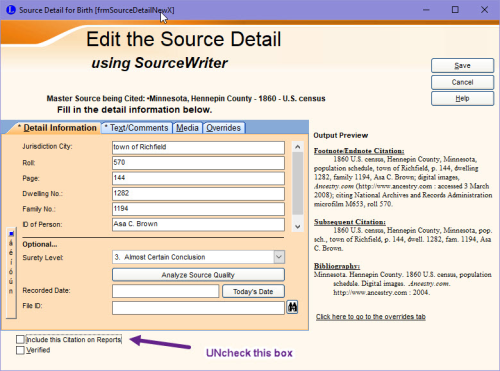 Now when you run a report only the one citation appears. This gives you the best of both worlds. You can record all of your sources so you can properly analyze them and weigh them against each other but you can also restrict what prints in your reports so that you don't clutter them up with unneeded citations. You want to record all of the sources you consulted for your research notes but your reader doesn't necessarily need to see them. There will be times when you will need to record more than one source in a single footnote which is perfectly okay. You might need multiple sources to prove a single piece of evidence especially when you are dealing with indirect evidence. You just don't want to be redundant by including sources that aren't needed.

So what is all this about weighing evidence against each other? Again, Elizabeth Shown Mills explains it best in her Evidence Analysis Process Map (pdf). Legacy has a built-in tool to help you with this.  Go back to Asa's Assigned Sources and this time open the Detail screen for the Brown Bible. You will see a button to Analyze Source Quality. 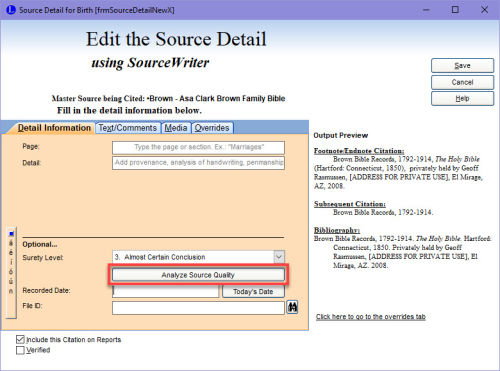 You can see this looks very similar to the Evidence Analysis Process Map. I have marked the Bible as:

Original Source - Geoff has the actual Bible in his possession
Secondary Information - Remember, this is the source for Asa's BIRTH. Even though Asa recorded the information himself he wasn't in a position at the time of his birth to be a reliable witness. He recorded the date of birth that his mother told him
Direct Evidence - It directly answers the question, "When was Asa born?" 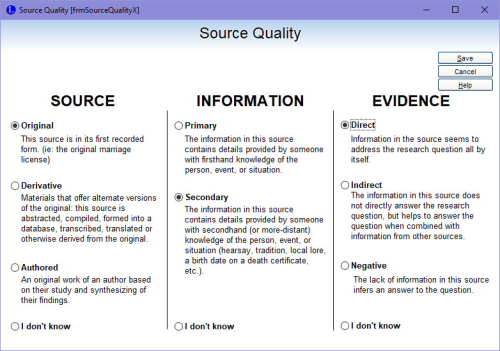 This same source is used in many places and the evidence analysis will vary a bit depending on what you are using this source for. For example, let's say Asa and his wife's marriage date is recorded in the Bible. Now it will be Primary Information because Asa was at his own marriage and he is reporting the date with first hand knowledge.

You can go even deeper than this because you have to take some other things into consideration. What was the publication date of the Bible? Are the entries all in the same hand? Are some of the entries before or after the primary owner was born or had died? You need to look at EVERY source you use critically.

So where do you put this kind of information?  Here is another shot of the Source Detail screen. You can see I have added a comment for the provenance and my analysis. This is all made up information. I am only using this as an illustration. 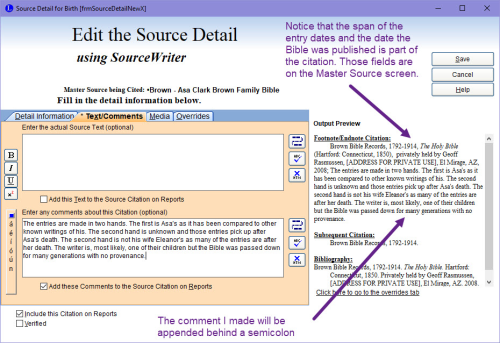 Notice that the box to Add these Comments to the Source Citation on Reports is checked but I have some additional control of how this will print. After you have closed out these screens go to Options > Customize > Sources > Option 7.2.  Remember, you want your sources to be complete but also as concise as possible for readability. I only want this extra information to print once. 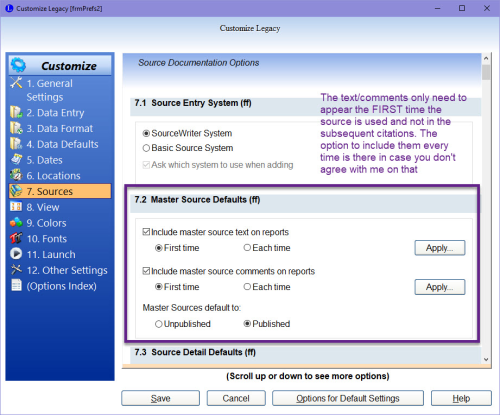 You will be recording all of the sources that you consult but sometimes you need to restrict what is exported to make the report more concise and readable. Having your reader wade through 15 redundant sources will never be better than reading one pertinent source.

Posted by Michele Lewis in Legacy Tips, Tips from the Experts | Permalink | Comments (2)

I understand the point that the author is making; however, if I am looking over someone's research, as a researcher myself, I would like to see all the sources that person consulted, so that I do not wind up duplicating research. The only way I would be able to do that under this guidance would be to get a copy of the database, rather than from the printed report. Also, if I am doing a report for a client, I would like for them to see all of the sources used. I do believe that writing comments on sources that have less concise information is necessary. As an aside, I thoroughly enjoyed the Evidence Analysis Process Map explanation. It was wonderful.

When you are dealing with an experienced researcher you would expect that the source given is the best source to prove the point and you assume that the researcher has considered all the evidence, especially the conflicting evidence. You expect that if an indirect evidence case is being made then all pieces of evidence for that case are included as source citations and the narrative explains how the pieces were put together to come up with the conclusion.

Now back to the real world... I understand your point about evaluating someone else's research especially something that you have found online. You want to see everything they looked at but in reality if you find something online the overwhelming chance is that you will have to re-research everything anyway because you can't simply trust the skill of the researcher unless you happen to hook up with one that is known to do quality work.

If you are coming in behind a client who has done some research you will want to know all of their sources but you will still end up going back over everything anyway because you don't know if the client properly evaluated the documents just by their source citation. If you are writing a client report, you don't include all of your sources, only those that are pertinent because it is assumed you have followed the GPS (Genealogical Proof Standard) in making your case and in your documentation (if you are a professional, accredited or certified genealogist). Usually in a client report you will include a full bibliography of repositories to let the client know where all you did your research but you don't include every single source you consulted.