Maximize Your Immigration Research with MyHeritage

Passenger lists provide genealogists with key information about an ancestor's arrival in the New World. Once located, these records can help us discover an immigrant’s original name and potentially assist with determining an immigrant's place of origin.

I started working on my genealogy in 1989 to learn more about my maternal grandmother, Verona Straka, and eventually published her story in my book Three Slovak Women. My early research involved family documents and interviews with my mother. My mother shared a story about how my grandmother was detained at Ellis Island for health reasons and almost did not make it into the United States.

At that time, I had no documentation to prove this story. In the old days of genealogy research (before online databases), obtaining a ship's manifest required a several step process of submitting forms to the U.S. National Archives and Records Administration. I did eventually track down the passenger list showing my grandmother's arrival in New York on 8 August 1922. There was a notation "hospital discharged" above her name, which meant she had spent time in the Ellis Island hospital upon arrival, and confirmed what my mother told me.

One of the benefits of indexed online immigration records is the possibility of more than one type of record turning up in the search results. So even if you have located the manifest for your ancestor through correspondence (as I did), via microfilm, or by using free sites such as The Statue of Liberty Foundation Ellis Island Database, FamilySearch, or subscription websites, it is worth searching for your ancestor’s name in all available immigration record collections.

I typed my grandmother's name into the "Ellis Island and Other New York Passenger Lists, 1820-1957" database collection on MyHeritage.com, and found her arrival record listed on the first page of results. This database contains over 113+ million records. My grandmother arrived in 1922 and the manifest spanned two pages consisting of 33 columns. MyHeritage has also indexed the answers to two vital supplemental questions: The name and address of the relative or friend whom they were joining in the USA (added to the form in 1897) and the name and address of their closest relative or friend in their home country (added in 1907), yielding an additional 26.6 million names to this database (see the post "New: Ellis Island and other New York Passenger Lists" from November 2017 on the MyHeritage Blog for details). So be sure to look for your ancestor’s name in these columns too. With a different search, I found my paternal grandfather listed as the "Relative joined in the U.S." on the 1920 passenger manifest for his sister. This is a great way to perform cluster and collateral searches. 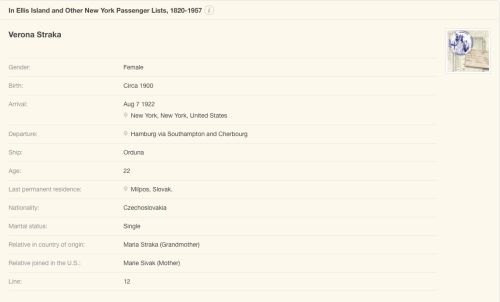 Another benefit of searching for New York passenger lists on MyHeritage is being able to view a two-page manifest such as the one listing my grandmother as one whole image and not have to move forward or backward to see each individual page as with other databases (MyHeritage took the 2.2 million paired images and married the pages together resulting in 1.1 million stitched images). To learn more about this particular indexing project, watch the free Legacy Family Tree webinar “Find Your Immigrant Ancestors AND Their Relatives in the NY Passenger Arrival Records” by Mike Mansfield.

In addition to the main arrival record I located for my grandmother, one of the results returned was for a Record of Detained Alien Passengers for the Orduna, arriving in New York on 8 August 1922. This record is my favorite ancestor find because it not only confirmed a family story, but also gave me additional insights into the immigration experience of my maternal grandmother.

In her article "A Guide to Interpreting Passenger List Annotations" Marian L. Smith, Historian, U.S. Immigration and Naturalization Service, explains the purpose of the Record of Detained Aliens form:  "Passenger list annotations from the early 1890's indicate that some immigrants were held or detained for further questioning, but there are no additional records on the microfilm about the detained immigrants. Beginning in 1903, at New York (Ellis Island), new forms came to be filed with each manifest and bound in the manifest volumes. One of these is the list or Record of Detained Aliens. Information on the record helps to clarify why a given immigrant was detained, how long they remained in detention, and how the case was resolved."  An electronic version of this article is found on the JewishGen website.

When I viewed The Record of Detained Alien Passengers for the Orduna, my grandmother's name was listed along with her cause of detention (Hosp. on arrival), the date and time of her discharge, and her next of kin, "Mother, Maria, 129 Crawford St. Duquesne, PA.” The “next of kin” information is actually incorrect as Maria was my grandmother’s sister, the mother of her niece, also named “Maria Straka” who traveled with my grandmother and also appears on the main passenger list. Passenger lists were prepared at the port of departure. The wrongly noted “next of kin” information” offers a good example of why we should always carefully evaluate any record we obtain about an ancestor. If your searches in the New York database collection are unsuccessful, you may be looking in records for the wrong port. While millions of immigrants arrived in the United States at the port of New York between 1820 and 1957, it is quite possible your ancestor landed elsewhere. The Immigration collection on MyHeritage also includes searchable indexes and/or records for the ports of Philadelphia, Boston, Baltimore, and Atlantic and Gulf Ports, as well as other collections such as Port of New York, Index to Discharged or Deserted Crew, 1917-1957, and United States Passport Applications, 1795-1925. For tips on immigration research, watch the free Legacy webinar "Following Your Family's Immigration Trail on MyHeritage."

Of course, your mileage and search success with immigration records may vary. But, as with any genealogy site, you should keep checking MyHeritage for new and updated database collections. You never know where you will find that new clue about an immigrant ancestor.

For over two decades, author and instructor Lisa A. Alzo has been educating and inspiring genealogists around the world to research and write about their ancestors. She has presented 44 webinars for Legacy Family Tree Webinars, include nine on Writing and Publishing. Lisa coaches aspiring family history writers through her online courses at Research, Write, Connect https://www.researchwriteconnect.com