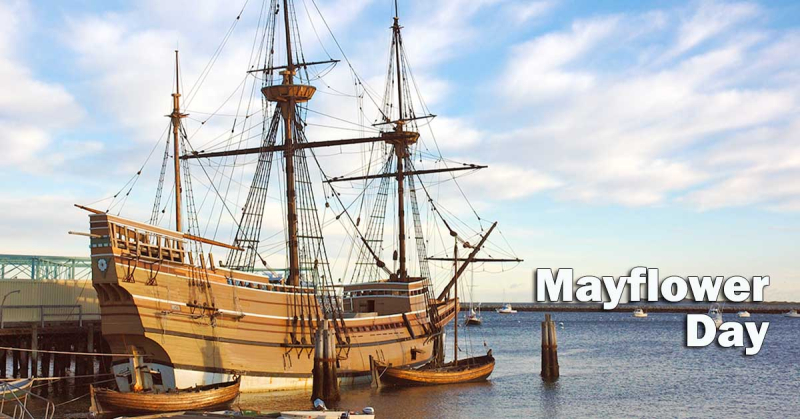 When we think of the pilgrims traveling to America, words like bravery and courage come to mind. But what about the words “love triangle” and “unrequited love”? Maybe that’s not the first thing you think of when the subject of the Pilgrims comes up but like people today, the Mayflower passengers experienced  their own very human dramas apart from the courage they displayed in their efforts to  start a new life.

Since the 19th century, historians have documented the history of those early immigrants. However, even non-fictional accounts have crept into our imagining of the Mayflower story. For example, American poet Henry Wadsworth Longfellow imagined one scene between the passengers of the Mayflower where Priscilla Mullins was part of a love triangle with John Alden and Captain Miles Standish.

In his poem, The Courtship of Miles Standish, Longfellow describes a situation where Miles Standish convinces his friend John Alden to go on an errand that he himself is unable to complete. He wants John to approach Priscilla and let her know of his feelings for her. In the poem he says,

“Since Rose Standish died, my life has been weary and dreary;

Sick at heart have I been, beyond the healing of friendship.

Oft in my lonely hours have I thought of the maiden Priscilla.

She is alone in the world; her father and mother and brother

Died in the winter together; I saw her going and coming,

Now to the grave of the dead, and now to the bed of the dying,

Patient, courageous, and strong, and said to myself, that if ever

There were angels on earth, as there are angels in heaven,

Two have I seen and known; and the angel whose name is Priscilla

Holds in my desolate life the place which the other abandoned.

Long have I cherished the thought, but never have dared to reveal

Being a coward in this, though valiant enough for the most part.

Go to the damsel Priscilla, the loveliest maiden of Plymouth,

Say that a blunt old Captain, a man not of words but of actions,

Offers his hand and his heart, the hand and heart of a soldier.

Not in these words, you know, but this in short is my meaning;

You, who are bred as a scholar, can say it in elegant language,

Such as you think best adapted to win the heart of a maiden."[1]

John Alden does go on his “lover’s errand” but it backfires. Although Alden ends his speech to Priscilla with the words “Might be happy and proud to be called the wife of Miles Standish!” Priscilla all but rejects that notion and replies with “Why don’t you speak for yourself John?”

This type of story is actually age old and often repeated. It’s a story of a pursuer who doesn’t have the confidence to talk to the one they are infatuated with and sends a friend as a substitute to woo the love interest but that person instead ends up falling in love. Longfellow’s Miles Standish feels  betrayed, as one can imagine, when John ends up with Priscilla but he does later apologize to his friend on John and Priscilla’s wedding day:

“Into the room it strode, and the people beheld with amazement

Bodily there in his armor Miles Standish, the Captain of

Grasping the bridegroom's hand, he said with emotion, "Forgive

I have been angry and hurt,--too long have I cherished the

I have been cruel and hard, but now, thank God! it is ended.

Sensitive, swift to resent, but as swift in atoning for error.

Thereupon answered the bridegroom: "Let all be forgotten between

All save the dear, old friendship, and that shall grow older and

Then the Captain advanced, and, bowing, saluted Priscilla...”[2]

Obviously, Longfellow took poetic license as he wrote his poem but the story itself reminds us that our ancestors, even Pilgrims, were human beings who experienced, love, anger, hardship, and betrayal just as people do now.

So what's the real story behind Priscilla and these two men? Did Longfellow get it right? John Alden was hired in Southampton to be a barrel-maker on the Mayflower. One he arrived in America, he was given the option to stay in America or return to England. He chose to stay in the New World and in 1623 he married fellow Mayflower passenger  Priscilla Mullins whose parents and a brother Joseph perished in the first winter at Plymouth.[3] John and Priscilla went on to have 10 children.[4] The Standish and Alden families (Miles’ first wife Rose died in Plymouth January 29, 1620/1621 and he later married again by 1624 to Barbara) were close and Alden even took care of Standish’s will inventory as requested by the latter’s wife.[5]  So if this love triangle and heartbreak existed, it’s apparent the ill feelings didn’t last too long.