The Mystery of the IOOF Cemetery

Recently I was in Denton, Texas visiting a younger family member and he said something about a local cemetery in town. This cemetery is very visible since it is in the middle of town and has quite a presence. He knew that I would want to see it. In describing it to me so we could drive there, he called it the "ioof cemetery." I asked him what he was talking about and he again used the word "ioof."

I instantly knew what he was talking about. What he didn’t realize was that those four letters didn’t make up a word, they were an acronym. The  I.O.O.F. He was unknowingly referring to Denton’s, International Order of Odd Fellows Cemetery. 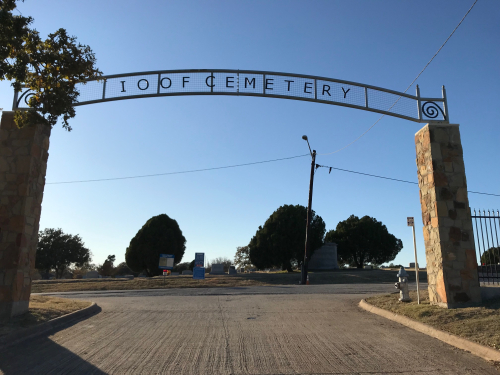 This misunderstanding over what those letters my family member was pronouncing meant led to a great history lesson, well maybe not so great for him, as I explained who the Odd Fellows are and what the symbols found on the gravestones in the cemetery meant.

1. Acronyms have no place in our research

You may know what something means but that doesn’t mean your family who inherits your research does. Because the young people I was with that day thought that IOOF was a word and not an acronym they believed it meant something completely different based on some youthful slang that they were familiar with. Language is fluid and meanings change over time and this was a great example of that. People understand what they see based on the context (experience) that they have. And even if I were to use the words  “Odd Fellows” instead of the acronym IOOF most of my family would have no idea what those two words refer to.

The Denton Odd Fellows provides a good example of paying attention to detail when we research. Denton, Texas has the Odd Fellow Cemetery and many of the tombstones displayed symbolic evidence of the IOOF members buried there, as well as members of other groups like Woodmen of the World. But the IOOF influence was bigger than the name on a cemetery sign. One of the adjacent streets to the cemetery was named IOOF. When we went to the city square to buy books and coffee, one of the storefront doors displayed a sign proclaiming it was an Odd Fellows meeting place. So the presence of this group could be felt in numerous places. 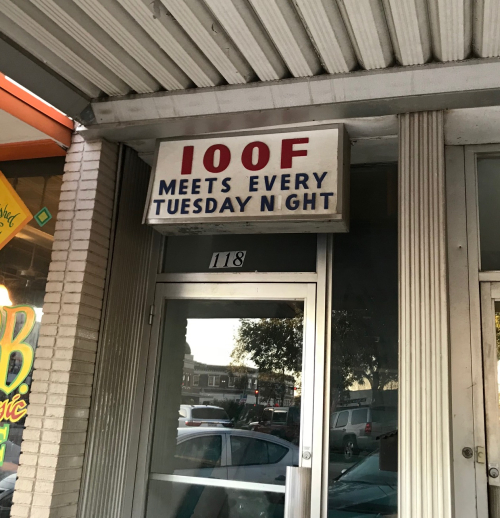 As I walked the Odd Fellows cemetery, pointing out the history behind some of the  gravestones found there, I was reminded at how much information  cemeteries silently provide us. Through the shape of monuments, the symbols found on them, and the biographical information detailed on those stones.  Those details are what genealogical research is all about.

As I thought about the IOOF in Denton and did some Google searches I learned not only more about the history of  the cemetery but where the cemetery records are (the Courthouse Museum ), and photos of gravestones via the Texas Gravestone Project. That’s just the beginning. On-site research in Denton would yield even more information.

It’s important as we think about our family history research that we do future generations a favor and define acronyms, unfamiliar or dated terms and that we add some context to the information we find. Yes, the photo of R.N. Harriss’ gravestone shown below provides birth and death information  but you’re missing an important clue if you don’t know what the FLT found in the chain links on this gravestone means.[3] 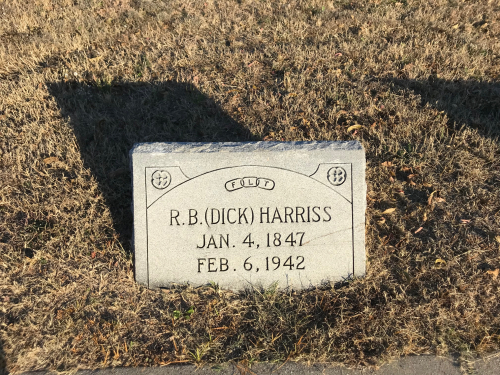 Not everyone in our family  is as curious about their ancestors as we are. It’s important that we make the information we leave behind accessible to the very people we want to embrace it.

[3] FLT = Friendship, Love, Truth which are principles that Odd Fellows are called to live. See the About page on the Odd Fellows website at https://odd-fellows.org/about/odd-fellows/

I used to live right across the street from this cemetery and spent many hours walking through it. Maybe I'm weird but I find cemeteries to be very calming and interesting. Most people in Denton don't pronounce it as a word, but use the initials (eye-oh-oh-ef).

Thank you for sharing this information.

OK. Thanks for this explanation. I grew up with I-O-O-F meaning Independent Order Of Foresters which is like the Elks Club or the Order of the Free Masons.

So what does FLT stand for?

My Grandfather and Father were Independent Order Of Foresters. My Grandfather was a British Home Child from the Birmingham, Warwickshire, (now called Midland), in England. He came over from England in 1875. When I did research on my Grandfather I found that he was a member of IOOF. Then my brother received a bursary from the IOOF upon graduating in 1962 to further his education because Dad was a member of IOOF. Thank you for displaying this article. I now know where the IOOF originated from, which is England. I will also contact the B. C. Canada's IOOF for further information on the Lodge.