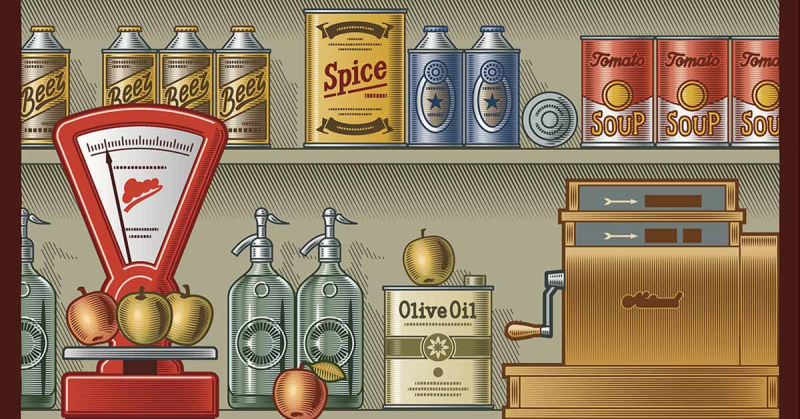 Eight pages of grocery items listed by date, name, and price purchased from the H.D. Powell Grocery Store in Houston County, Tennessee. In some ways it's repetitive. Bologna is always mentioned. Ice Cream now and then. These pages from H. Clay Lyle’s probate file are more than just a look at mid-century food stuff. It may tell us more about his family than what we assume at first glance. In a sense, this documentation of a grocery store debt provides us a look at a family frozen in time.

Probate records can be a goldmine for genealogists. You already know that. Even without a will, a probate file can provide valuable family history clues. That collection of documents provide information about the decedent’s death but also a look at their life. They provide genealogically relevant information such as family names, relationships, places and dates. Because a probate file might be full of information it’s easy to overlook those pages that doesn’t seem genealogically relevant. Case in point, H Clay Lyle’s debt to his local grocery store.

Hermon Clay Lyle was not yet 52 when he died in 1951. He left behind a wife and children, the youngest a teenager. His probate file is filled with information from local retailers about the debt he left behind. One of those claims is from the local grocery store and it includes details of what his family purchased over many months in 1950.

So as a grocery list you might be thinking, “who cares, what does this have to do with genealogy?” Bill Keaggy author of the book Milk, Eggs Vodka: Grocery Lists Lost and Found introduces his irreverent look at discarded grocery lists by writing, “Lists tell us about our neighbors, our friends, our ancestors, our species and ourselves.”[1] He goes on to tell the history of grocery lists and notes that some of the oldest grocery lists date back to the 1st century CE and are housed in the British Museum. [2]

The Powell Grocery Store inventory of what is owed by the estate of H. Clay Lyle gives us a peek at what the Lyle family was eating but it’s most likely not complete. Judging from the monotony of the few items purchased regularly at the store, it’s most likely that the family supplemented this food with others acquired in some other way. The family could have been tending a garden and thus that’s why vegetables are not found in large quantities from these lists. Maybe they canned their produce so to have food available throughout the year or in time of hardship. They could have raised chickens or hunted to provide meat for dinner (the inventory does show the purchase of eggs so it’s possible this wasn’t the case). They may have even received food in trade or barter for services. So, we shouldn’t assume that the family lived on bologna sandwiches until we do more research. However, bologna and cheese sandwiches makes sense when we see that the Lyle family included 7 children ranging in age from 18 to 4 years in 1940. Bologna sandwiches is a cheap, portable meal for feeding school-age children. 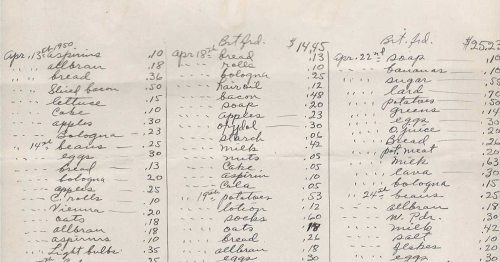 We also cannot assume that all the food purchased was consumed only by immediate family members. Other family members could have come to live with the family, especially if Mr. Lyle suffered a lengthy illness prior to death. It’s possible that when Mr. Lyle died in 1950, his family still included at least three of those children. So they had quite a few people to feed in their immediate family alone.

There are other assumptions we should avoid like “wow, that’s a lot of bologna” as you read these documents. Every store visit included some quantity of the sandwich meat (as well as other staples like bread). In genealogy we need to notice what records say as well as what they don’t say. Notice that no quantities are given in this inventory. The prices would hint at a quantity, perhaps if we used information on prices from the time period. But a simple notation of “oranges” only tells us it’s more than 1 but not much else. Bologna quantities, are not clear since this was probably purchased per pound. Cheerios would indicate a box (and yes, Cheerios existed in the 1950s, they were introduced in 1941). Buying bread would indicate that Mrs. Lyle was not baking bread, not that unusual for the time period and because sliced bread would have been readily available.

I’ve talked about what the inventory doesn’t tell us but what does it tell us? Well, it does start to provide a sense of the family’s foodways. What foods were available in Houston County, Tennessee in the 1950s? This list gives us a hint. The family enjoyed desserts and had a sweet tooth. They regularly bought Ice cream, cake, gum, cola, cookies, and pudding make appearances on the list. They do eat canned food including potted meat, Vienna sausages, and pork and beans. There’s no doubt their regular meals included milk, bananas, bread, cheese, and bologna. But occasionally other foods made an appearance such as franks (perhaps hot dogs), pickles, potatoes, and cabbage. Staples such as salt, lard, and sugar are also purchased.

For those of us who are not familiar with running a tab at the local grocery store, this could lead us to learn more about this practice and look for manuscript collections for stores in our ancestor’s hometown for possible records the store kept. 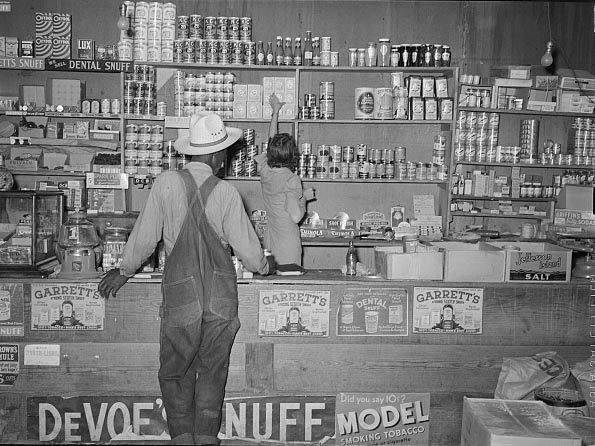 One other mystery that the list doesn’t explain has to do with the debt and the dates. Mr. Lyle died on 17 January 1951. Powell Grocery store provided the list and a statement about the debts in April 1951. However, the lists date from April 1950 to July 1950. Why are there no charges for the later half of 1950 or the beginning of 1951? Possible answers may include the closure of the store, the family temporarily moving, frequenting another store, or accepting food from another source. Further research into this question might provide some genealogically relevant information.

One last thing to consider. This list is from a probate for a man who is living in Tennessee prior to the 1950s. Like the saying goes, “the past is a foreign country, they do things differently there.” I am analyzing these pages as someone who has never lived in Tennessee nor ate in the 1950s. So research into the area and its food history would help me make sense of these documents.

It’s easy to quickly go through a probate file and quickly dismiss items that seemingly do not provide genealogical information. But to do so would be a mistake. Items including the seemingly ordinary list of grocery items can shed some light on a person’s life. This list is a good reminder that genealogical analysis means careful consideration of all materials connected to our ancestors.

Thanks to Melissa Barker who alerted me to this case and provided me the documents.

I grew up in a very small town in Maryland 40 miles outside Baltimore, in the 1950s, so probably similar to the situation that this family was in.

The frequent purchases of perishables tell me that the family may have had an icebox, but not a refrigerator (I remember the iceman), so the bologna might have been just enough for sandwiches for a day.

We shopped at the local general store a quarter-mile away, but once every two weeks when my father got paid, we went to a larger grocery in a nearby store to stock up on canned goods, some meat (carefully figured so the most perishable was used first) and whatever vegetables we didn't grow in our garden. My mother canned in the summers for vegetables and fruit, often bought a bushel or so at a time in season and preserved.

I don't see any mention in the few entries shown of any baking supplies, not just for bread -- my mother baked a lot but got those supplies at the larger store.

One oddity here -- there seem to be multiple purchases of aspirin, and I wonder if they were being sold by the tablet? It was probably legal to do that at the time.