How to Approach a Genealogy Mystery with Just a Few Clues

As I browsed in an antique store one weekend, the two faces jumped out of me. That wasn’t an easy task since the card they appeared on was virtually hidden in a locked glass cabinet tucked inside a yellowed plastic envelope, and a 1950s envelope obscured part of the card. When I got someone to unlock the cabinet so I could take a look my first thought was that S. Ada Miller had to be a woman and that this might be a political campaign piece for a woman seeking to be elected at about the time of the 19th amendment. 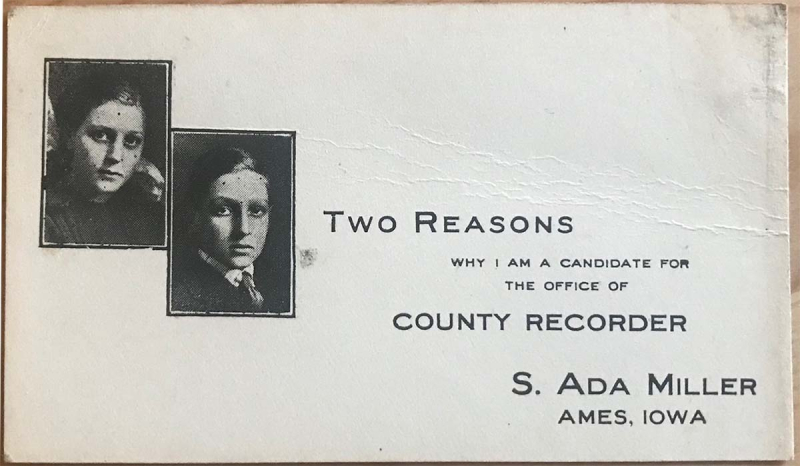 The card shows two children and states “Two Reasons why I am a candidate for the office of county recorder. S Ada Miller. Ames Iowa.” 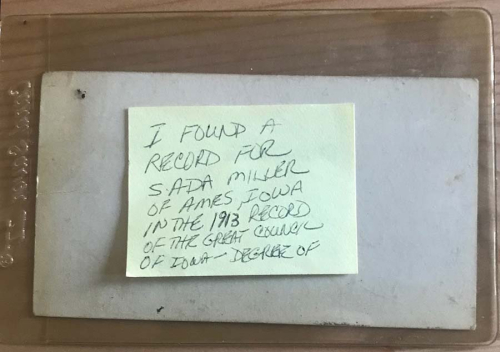 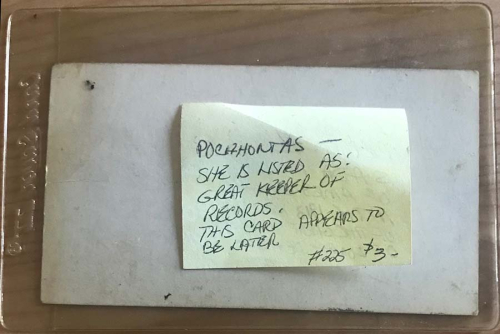 On the back, the antique dealer wrote on a small post-it note that she had found an S. Ada Miller in the 1913 Record of the Great Council of Iowa-Degree of Pocahontas “she is listed as Great Keeper of Records.”

Quite frankly at $3.00 it was worth a risk to purchase it and learn more to satisfy my curiosity.

How Do You Start?

How do you start to research someone that you only have a few clues for? Well, first you note what clues you do have. In this case I knew:

So what do I not know and have research questions about?

Now that I’ve identified what I know and my research questions, I need to start considering where to research. An obvious first step is to conduct a search on a genealogy website and see if I can locate her in the U.S. Census. If I can find her, that might confirm if she had children, a spouse, her approximate age, and where she lived. It might also give me an occupation. However, it’s not uncommon to find working women listed as a “housewife” in the census so I can’t make an assumption that the census will help with occupation.

Once I find her in the census and get that information I can then move on to other sources. For example, I should look for:

Because she ran for a city government position, I should expect to find her listed in newspapers. So I need to look for articles about her in online newspaper websites. I would also look in digitized books for possible local and family histories, directories, county reports, and other location-specific items.

Besides possibly being involved in government I know that the antique dealer found her name in a book or other records for the “Great Council of Iowa – Degree of Pocahontas.” The dealer didn’t say where this information comes from and I still need to verify this find. I’m assuming that the Degree of Pocahontas is referring to the female auxiliary to the fraternal order, the Improved Order of Red Men. This may mean additional records and at the least, it provides social context to her life. It also may mean she was married and her husband was in the Improved Order of Red Men fraternal order.

I can also expand my search by learning more about resources in Iowa by consulting the FamilySearch Research Wiki as well as specifically look in the FamilySearch Catalog for Iowa and the county for Ames, Iowa (Story). I do know that I will need to check:

Before I start researching what else should I consider? Anything missing? What would you check? I’m interested in your thoughts and ideas.

In Part 2 we delve deeper into the case of S. Ada Miller.

I spent about 45 minutes with Ada and learned a great deal - including that she did serve as county recorder, and had another husband before James Miller. And her son died young. 😢
Thanks for the excuse to waste a little time!
🤓

Where /When do we find Part2 of this research item, "How to approach a genealogy mystery with few clues...." I appreciated the research options in this reading.

Don't forget the city directories which would not only include residents, but generally have fraternal organizations w/officers and elected officials (though these are seldom indexed properly in the online OCR databases and usually require a manual look-see.)

Yearbooks for 'Miller' might also yield some matching photo's for the children as well as S.Ada.

A google photo-match search with the photo's of the two children may be fruitful -especially if those photo's appear in other election campaign ads.

Is there a local board of elections? They should have historical documentation of candidates.

In viewing the 2 photos on the card, I'm not sure these are children. I would call this an assumption at this point. I think the one on the left is female and the other a male judging by what I can see of the clothing about their necks and shoulders. These persons could be older than 12 yrs of age. I would start my search using Google and DuckDuckGo. A search of old newspapers around Ames, IA would be next. I would look for a genealogy (Local History) library in Ames and contact it or search its on-line files if it has such.

Also, search phone, city directories, etc. of that period for the surname "miller". You might find a parent or descendant with a similar name. This might give a clue to the prominence of that family and associations. Also include alternate spellings such as Mueller. If you can visit that location, look for records at the court house of the county (property, birth, death, marriage, divorce, etc).