Who Wrote This? Analyzing a Diary (part 2)

If you remember from my lastpost, Starting Research: Analyzing a Diary, we were looking at how to analyze a diary to prepare for research. I suggested some things you may want to ask as you contemplate a diary analysis. Here's the process I followed for my analysis. 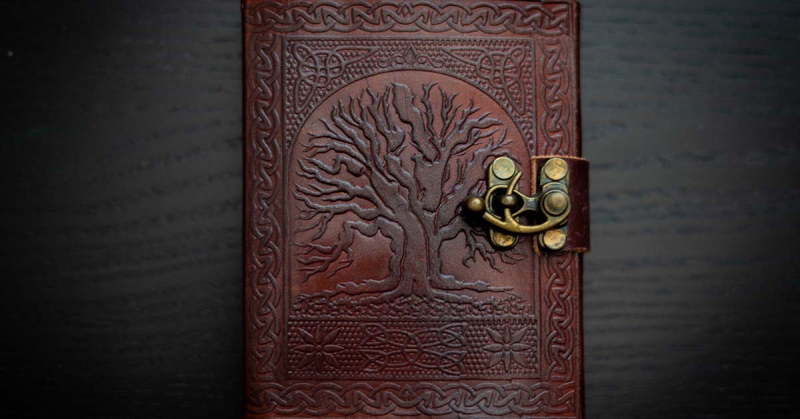 I purchased the diary from eBay so there wasn’t much available for the provenance of the diary and I failed to ask the seller about the item to see if they had any additional materials from the estate. (This is a mistake I rarely make now. I always ask for details.)

The diary is a cloth-colored date-type book from 1927 that was given out by National Surety Company. It reminds me of a datebook where each date includes room to write appointments or other text. While the outside cover is damaged the inside is not except for missing pages that appear to have been torn out.

Inside the front cover in pencil is the name “Martha L Krentz." It’s possible this was the owner but I’m not sure if she is also the person who wrote in the diary. More on that later.

Entries are done in pencil and pen and although there is room to write something for each date in 1927, the entries do not correspond to particular dates and in some cases, they are dated several years before and after 1927. It’s not a chronological diary.

Entries include everything from vital record information (names, and dates) to everyday events, the weather, to money owed. There appears to be no “order” for these entries and some pages are blank. In some cases, there are pages torn out.

This diary isn’t what I typically think of when I think of a diary or journal. It’s not chronological and it doesn’t seem to have any kind of specific order. Although it does include some entries about what happened on a specific day, it also includes vital record information and even notations that are more worthy of a scratch piece of paper, such as adding up money owed. So with that, I need to start asking some research questions.

The name Martha L. Krentz appears on the inside cover. The first pre-printed page, January 1st, has the word Births handwritten and includes “Father John Beck” and “Mother Louisa Rottsted.” So it stands to reason that whoever wrote in this diary might be the child of these two parents. But it could also be the parents of a spouse. In addition, under their vital record information is a list of children, none of which are a Martha. However, she does make an appearance on a different page. So it’s important not to make assumptions and to instead note everything that is found. 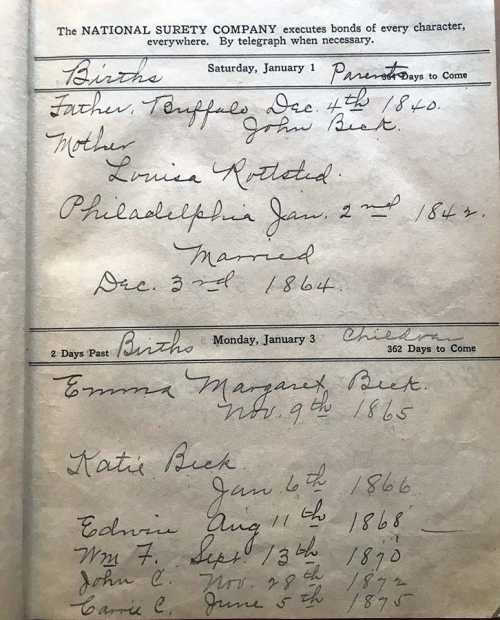 I’m not convinced the diary writer is Martha because another page dated February 21, 1915 states “Herman, Martha, Irving, and I took walk through Cazenovia [?] park People were sitting in Park and Veranda.” Martha is referred to in other entries in the third person “Martha stopped work…Martha gave us.” It’s possible that the diary has two writers or Martha’s name on the inside cover is there for some other reason. We could try to analyze the writing to get some answers about whether the writing is done by one or two different people. 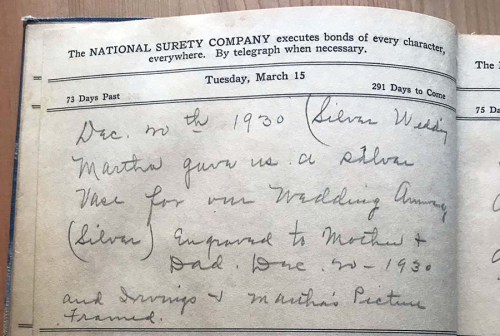 This diary writer chronicled events important to her including the death of her husband and their 25th wedding anniversary. The two entries for the silver anniversary may provide us a clue to the diary writer. She writes that Martha gave “us a silver vase…engraved to Mother and Dad, December 20, 1930 and Irvings and Martha’s Picture framed.” If Martha L Krentz is the daughter of the diary writer? Researching Martha might give us the name of the writer if it is indeed not Martha herself.

Continued work on this diary would include transcribing and/or abstracting and then research. Because the diary is rich in names and dates, it’s possible it provides genealogical information that could be researched and verified and ultimately, perhaps, lead to the whereabouts of a descendant.

Surnames found in this diary include:

In this 2nd analysis step, we can spend time writing down what we know and don’t know so we start to ask research questions. Some of my questions include:

If you’re interested in learning more about using diaries and letters in historical/genealogical research, see Making Sense of Letters and Diaries by Steven Stowe.

What have I missed? What questions do you have? What experiences with historical diaries do you have? I’d love to hear your thoughts in the comments below.

It is quite possible that there are two Marthas - the diary writer and her daughter.