Register for Webinar Wednesday: Introduction to Researching Your Mississippi Ancestors by Angela Walton-Raji 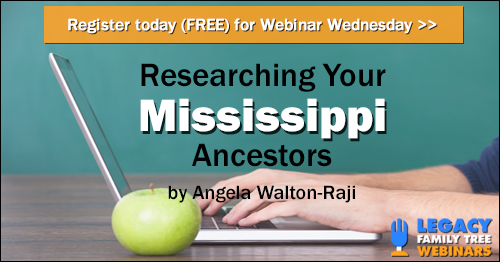 Mississippi, like many other states has rich genealogical data for African American research, most of which can be found in traditional places---census, vital records, local courthouse records. However, this state also offers some unique records from the period of the Civil War, the era of freedom and emancipation, and also records reflecting families to ties with Native American communities. There were 31 branches of the Freedmen's Bureau throughout Mississippi. There were 11 regiments of the United States Colored troops representing over 10,000 men of African descent in the Union Army from the state. In addition to many of those collections, are resources from the Educable Children's list, Southern Claims Commission records of black homesteaders. This session will explore some of those rich resources and methods of finding them.

Angela Walton-Raji is known nationally for her genealogical and historical research and work with Oklahoma Native-American records. Her book, “Black Indian Genealogy Research” was the first book of its kind focusing on the unique record set reflecting Freedmen found within the Dawes Records. She also includes several chapters and documents in her book, focusing on the records that reflect Blended Families---African and Native American families in many households.

Her latest books, “Freedmen of the Frontier” volumes 1 and 2 were released in 2019 and 2020 respectively. The books present family profiles of Freedmen from the Cherokee, Choctaw, Creek and Seminole Nations.

Her work has also involved her researching families for several media outlets for televised broadcasts. She has spoken at RootsTech, the Genealogy Jamboree, in California, Federation of Genealogical Societies, Afro-American Historical Genealogical Society, “Behind the Big House” programs in Arkansas, and other events in numerous states from California to Virginia.

Among other genealogical focus areas are black Civil War soldiers west of the Mississippi, African American benevolent societies, and the early days of freedom.

In the 1990s, she was a founding member of AfriGeneas.com, and for ten years, Ms. Walton-Raji hosted “The African Roots Podcast”. She has produced a number of instructional videos on YouTube, and has served as an expert consultant on video documentaries, as well.

A researcher with national reputation, Ms. Walton-Raji’s talents have been recognized by the Smithsonian Institution in Washington DC, for over a decade. In the 1990s she was a featured speaker at a number of Smithsonian events, and she was the only genealogist in the nation, to present regular genealogy lectures at the National Museum of the American Indian, in both the Washington DC and New York facilities. She was awarded the honor of presenting a special series of genealogy lectures to coincide with the Smithsonian Exhibition IndiVisible that officially launched in November 2009, that traveled for several years throughout the nation.

Her specialization in research secured an invitation to present her research at a special hearing at the Cherokee nation Supreme Court on behalf of a Cherokee Freedman citizenship case. She was invited as an expert witness in the case of Riggs vs. Ummerteskeee in Tahlequah, Oklahoma. This was a case where Cherokee Freedman descendant was filing a case against the nation for preventing citizenship to descendants of their former slaves.

In addition to the above, Ms. Walton-Raji’s comfort with language and skills in writing, make her well known and well respected in the genealogy community. And in 2017 she taught a four-week online class offered through Family Tree Magazine on Native American genealogy.

Another specialty is her experience documenting United States Colored Troops---Black Union soldiers of the western theatre of the Civil War. She has shared info on women in the Civil War, at Roots Tech, the largest genealogical event in the world, and she is a frequent presenter at the Southern California Genealogy Jamboree in Burbank California.

Ms. Walton-Raji is a founding member of MAAGI, the Midwest African-American Genealogy Institute, MAAGI is a genealogy teaching institute, (maagiinstitute.org) which is hosting its 8th consecutive event at the world famous Genealogy Center in Ft. Wayne Indiana in 2020. She holds a bachelor’s degree in Spanish from St. Louis University and a Master of Education from Antioch University. Ms. Walton-Raji resides in Maryland, where she continues to teach, research, and write.