The Sound of Our English Ancestors

My ancestor, Leonora Quayle, was born in 1763 on the Isle of Man. She had moved to Liverpool by the age of 27 where she married and then ultimately died in 1850. I imagine she would have taken her Manx accent with her to Liverpool.

Have you ever wondered what your English ancestors sounded like when they talked? England has many regional accents. One hundred years ago there would have been even more.

While it may not be possible to know exactly how your ancestor spoke there is a way that we can get an idea. The British Library has 287 sound recordings in a collection called "Survey of English Dialects." 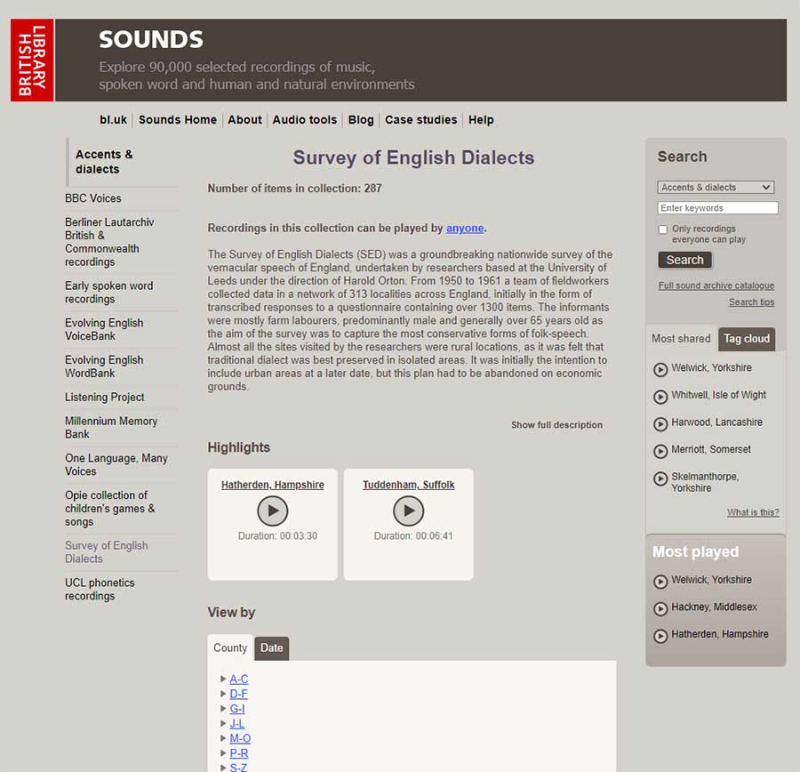 The recordings were created by the University of Leeds under the direction of Harold Orton between 1950 and 1961. The goal was to capture "folk-speech" from rural areas in order to preserve the sound of regional accents. The collection is sorted alphabetically by county. Under each county you may find multiple recordings for individual towns. The speakers are mostly men but there are some women too.

I found a recording from the Isle of Man. Here's an 1958 recording of "Amanda [who] expresses her dismay at the lack of discipline she sees in children." Perhaps she can give me a clue as to what my ancestor, Leonora, sounded like.

Perhaps your ancestors come from the south of England in Cornwall. In this audio clip from 1963 "William talks about his early working days on the farm and compares modern working conditions and food production with those of his younger days." To the non-British ear this recording is probably much easier to understand the first one.

Or maybe your ancestor came from Lancashire, home to the cities of both Liverpool and Manchester. Here "Three fisherman remember the fisherman's strike of 1926..." This recording was made in 1954.

Explore the recordings included in the Survey of English Dialects and discover how your ancestor might have spoken!

Need help tracing your English ancestors? Check out our many English genealogy webinars in the Legacy library!

Marian Pierre-Louis is a genealogy professional who specializes in educational outreach through webinars, internet broadcasts and video. Her areas of expertise include house history research, southern New England research and solving brick walls. Marian is the Online Education Producer for Legacy Family Tree Webinars where she produces online genealogy education classes. Check out her webinars in the Legacy library.

Posted by Marian Pierre-Louis in England, Tips from the Experts | Permalink | Comments (3)

Thank you for sharing this tip and link, Marian.

Thanks for posting, my 3X GGrandmother was Isabella Kelly (nee Quayle) c1790-1875 from IOM,
others were from Cornwall & Liverpool.

Thank you for posting this, Marian. I have bookmarked the site for future reference. I have ancestry from both Cornwall and Lincolnshire so it is interesting to me to hear these dialects. Do you know if there is any such site for Scottish dialects?