Register for today's Down Under webinar: The Madness of ‘Mc’ Surnames by Carol Baxter 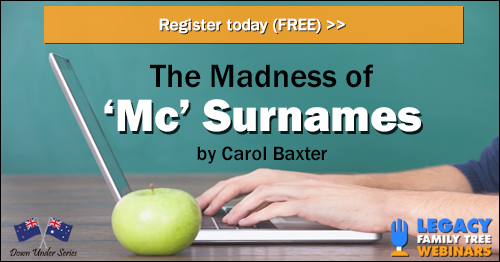 If you have already worked out that ‘Mc’ and ‘Mac’ surnames are the most complicated British surnames, you must listen to this webinar. And if you haven’t already worked this out, you must absolutely listen to this webinar. ‘Mc’ surnames are double the trouble because they can suffer distortions at the beginning, middle and end of the ‘Mc’ prefix as well as at the beginning, middle and end of the rest of the surname, the root word. Sound glides are a particular problem, in which the ‘k’ sound at the end of the ‘Mc’ prefix distorts the first letter of the root word (e.g. McCue/McKew/McHugh, McLachlan/McGloughlan). Transcription errors can also produce a non-‘Mc’ surname (e.g. Mackever/Markever) which can prove a trap for the unwary. This seminar will help you keep you sane when you encounter the complexities of these mad Scottish-origin surnames.

Carol Baxter is an experienced and informed historian and genealogist, an internationally-acclaimed, award-winning author, and a dynamic, inspirational presenter.

Carol has been a genealogist for four decades having first become interested in family history research while still at high school. Her career as a professional genealogist began when she was appointed Project Officer of the Australian Biographical and Genealogical Record (ABGR). In that role she edited six volumes of early New South Wales muster returns (similar to census returns) and later the convict indents for 1788-1812. She edited many other record series when she became General Editor of the ABGR’s new incarnation, the Biographical Database of Australia. She is a Fellow of the Society of Australian Genealogists and an adjunct lecturer at the University of New England.

Her career took a different turn in 2004 when she began writing “popular history”. Her first manuscript was picked up by the first publisher she approached within a few weeks of submission. She is now the author of six “historical true-crime thrillers” of which An Irresistible Temptation (2006), Breaking the Bank (2008), Captain Thunderbolt and his Lady (2011) and Black Widow (2015) were published by Allen & Unwin to critical acclaim. Both Breaking the Bank and Captain Thunderbolt and His Lady received first prize in writing competitions. Captain Thunderbolt and his Lady is also being turned into a TV series while Black Widow has been turned into a computer game. Allen & Unwin also published The Fabulous Flying Mrs Miller (2017). Publishers Weekly (USA) wrote that it’s a “thrilling biography”. It’s being turned into a big budget six-part TV series by the producers of the Academy Award nominated film Lion.

In 2013, Britain’s Oneworld published The Peculiar Case of the Electric Constable. The Times (London) wrote that it is “as lively and readable as a crime novel” while Britain’s Independent newspaper praised it as “totally irresistible”.

‘How to’ genealogy books are among Carol’s other works. She published Writing Interesting Family Histories in 2009 and produced a third updated edition in 2016 along with a companion volume Writing and Publishing Gripping Family Histories.

She is eager to help researchers ensure that their evidence is accurate (having encountered much historical research that is inaccurate) so she published Help! Historical and Genealogical Truth: How do I separate fact from fiction? in 2016.

Her passion for surnames and given names and the knowledge she has acquired by virtue of her linguistics degree and her years working as a transcriber led her to write “Help: Why can’t I find my ancestor’s surname?” (2014) and “The Madness of Mac Surnames”, published by Unlock the Past in 2018. A series of handy guides on English, Scottish, Irish and Welsh given names was been published by Unlock the Past (2019). Unlock the Past also published her lively and humorous pre-beginners guide ‘To Trace or Not to Trace: a family history overview for the curious’ (2018).

Carol is also a sought-after speaker. She has been a presenter at four Unlock the Past genealogical conferences on international cruise ships, teaching researching and writing skills to family historians. She is also an enrichment speaker telling her true tales of murder, mystery and mayhem on international cruise ships. Prior to the pandemic, she told Mrs Miller’s tale as a three-part mini-series on the Crystal Serenity from Los Angeles to Auckland and was booked to speak on more cruises.

In all of her books and talks, her aim is to educate and to entertain her readers or audiences. She took this one step further in 2021 by launching the Writing Fabulous Family Histories website, which includes online courses teaching genealogists writing skills and researching skills. For further information: see www.writingfabulousfamilyhistories.com.

Carol can be contacted at carol@writingfabulousfamilyhistories.com.