"So you do genealogy, right?" How a Legacy Hint and MyHeritage solved the case 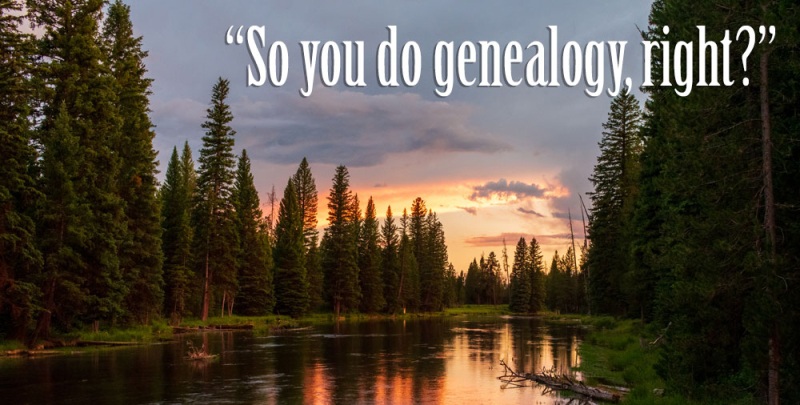 After talking about our cows and gardens, my neighbor asked, "so you do genealogy, right?" While I didn't know where he was going with this, I liked what he was thinking. He told me about a distant cousin of his that went to high school with him in the 1960s, and that he lost contact with her shortly thereafter. She hadn't shown up for their 50th school reunion the week earlier. He knew that she married, but had no idea to whom.  He asked, "can you find her?"

My wife responded, "but you only find dead people though, right?" After 25 years, I guess she doesn't know me as well as I thought....

I told him I'd get started right away.

So I opened up my Legacy Family Tree software, created his 3-generation tree, and started sleuthing. The clue about the sheriff made his great-grandfather easy to find. I then worked my way down to his cousin. According to Legacy's Relationship Chart report, they were indeed second cousins. 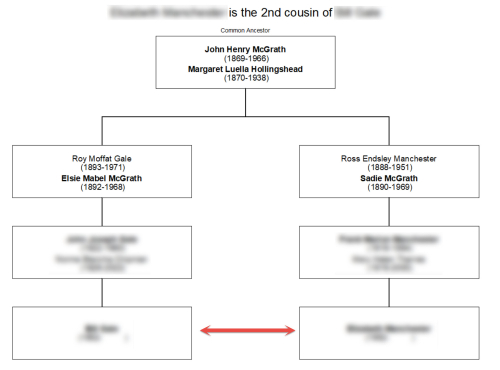 This is where it got difficult. I had no clue what his cousin's married name was. Or if she was still alive. However, I did know when and where her parents died. If I could locate their obituaries, I bet they would mention the survivors' names, including her married name and residence at the time. I scoured the online newspapers but none had the issues for the time span that I needed.

And then I saw it. The beautiful orange "hint" icon appeared in Legacy's Pedigree View. 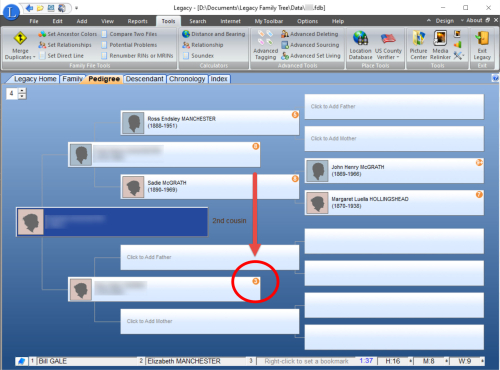 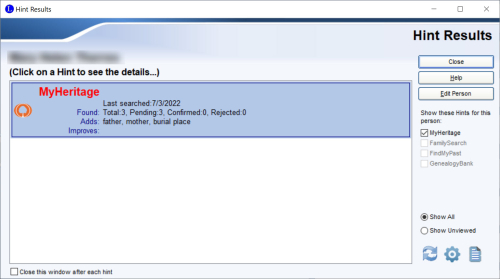 MyHeritage.com found three matches to something on the site that provided information about his cousin's parents and burial place. But I needed info on his cousin - not her grandparents.

I clicked. And there she was. 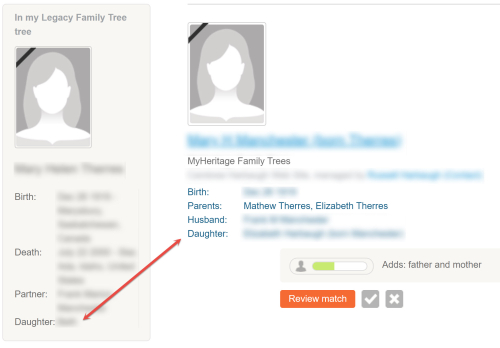 I know enough about "hints" to know that they should be scrutinized, explored, evaluated and researched. I even recently published these members-only webinars about online hinting:

So, using what I learned in our Finding the Living webinars, and now that I had her married name, I purchased a background search of his cousin  (searches public records), In minutes I had a 40+ page report of possible relatives, current and previous addresses, phone numbers, property she owned, and much more. Again, all of this is publicly available so there's no privacy issues here. Everything looked like it fit perfectly...as long as the match at MyHeritage had the right info about her married name.

Back to the obituaries. Remember how I couldn't locate the right edition of the needed newspapers online? Well, I went to the bank and took out a new loan so I could put gas in my car. Then I drove to the Idaho Historical Society in downtown Boise. In less than 5 minutes I found the obituary. The staff there was impressed. :) Again, I was predicting that the obituary of the cousin's mother would list the survivors' names and places of residences.

And it sure did!

The name of my neighbor's cousin exactly matched the hint that MyHeritage gave me. Well done Legacy Hints and MyHeritage! Well done. Case closed. I now know the cousin's identity and where she lives.

For two days now I've been calling my neighbor to give him the good news. He hasn't answered the phone. Either he's nervous to learn what I've discovered, or he's visiting his cabin in the beautiful Idaho mountains which has no cell phone reception. If I were visiting the mountains this weekend, I just might leave my phone home as well.

What service do you use for your "purchased a background search of his cousin"?

Great story and use of webinars used to learn how to fine the living.

Wow, that is amazing! Is peoplesearch free or paid

I was recently tasked with finding some missing classmates for a 50-year high school reunion. The best free tool was obituaries of their parents or siblings.

Betty - people search is free and paid. To obtain what I did I paid for one month.

This is possibly a controversial comment in genealogy circles (we all delight in access to information, right?) but every time I read a story like this or, indeed, if I am researching a living person myself, I get concerned for at-risk women or people who don't want to be found for very good reason.

There are two sides to a story of how easy it is to find a living person we don't personally know. It can be wonderful, but we also need to be careful.