My personal review of SpaceX's Starlink - "high-speed, low-latency broadband internet in remote and rural locations across the globe"

Starlink arrived just over two weeks ago on my doorstep with the promise of better internet speeds, better reliability, and a smaller monthly bill. I was on the waiting list for more than a year. Was it worth waiting for? 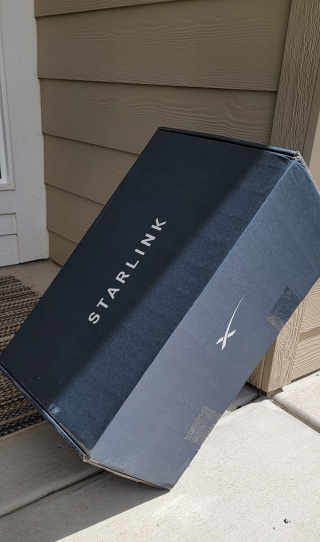 So as soon as I learned of SpaceX's announcement of Starlink, I put down a $100 deposit and signed up. They promised "high-speed, low-latency broadband internet in remote and rural locations across the globe." I didn't know what their speeds would be, but it had to be better than 20Mbps.

Twenty days ago I received an email with this subject line:

Your Starlink is ready! Confirm your order in the next 7 days

You have 7 days to confirm your order by clicking "Manage" on your Account Page otherwise your deposit will be automatically cancelled and fully refunded. Upon cancellation, you will lose your place in line.

The one-time hardware cost of $599 was expensive. I paid an additional $133.56 for the flashing mount, pivot mount, and ethernet adapter. The recurring monthly cost is $110.

Inside the box was the base, the router, the Starlink device, and a 75-foot cable. 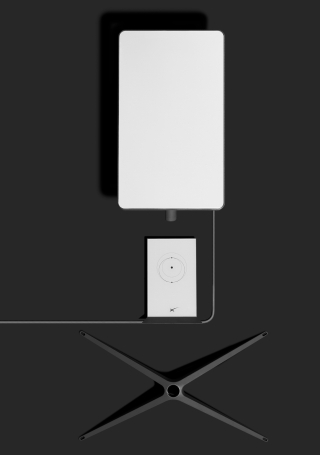 Oh, and the instructions:

These were literally the instructions. Three pictures: 1) put the Starlink thing in the base, 2) connect it to the router, and 3) run the Starlink app. It couldn't be that simple. So I tried it, and was blown away. It actually worked. I just put the base near the driveway, pulled the cord through a window, plugged it in and in minutes I was connected.

After a few days of playing and running speed tests, I knew I had to keep this permanently. The most difficult part of the process was drilling the hole through the roof, then through the second roof that the first roof was covering, pulling the cable through the attic, fishing it down the right wall, and into my office. Mounting the device to the roof was pretty simple. 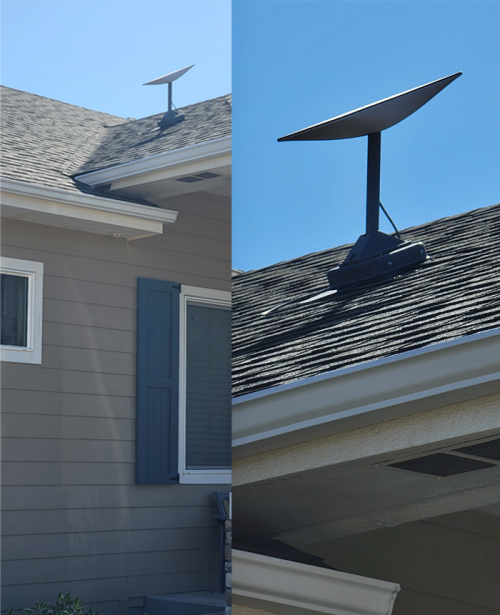 Here is my typical speed test before Starlink:

Here is my typical speed test with Starlink:

This is at 1:15pm. Earlier in the day I see speeds beyond 200 Mbps. So it's not in-the-city speeds, but it's incredible compared to what else is available.

The "mostly" part of this article relates to speeds in the evening when everyone in rural Idaho is home using their own Starlinks. Between about 6:30pm to 10:30pm, speeds slow down to between 10-20 Mbps. It's usually not a problem unless I'm watching YouTube TV, my wife is streaming music, and kids are working on homework (or so they say). Then it buffers a bit. It's probably a bit too slow for me to trust hosting a live evening webinar with it. All other times, it is wonderful and fast and so much less expensive. Starlink says this will continue to improve as they deploy more of their satellites.

One other thing I've worried about is the snow. We've had five feet of snow on the ground here in the past. What will happen to my internet connection when any amount of snow is on top of the Starlink? Starlink thought of that too:

Do I recommend Starlink? Like the great Judy Russell says, "it depends". If you live in a place where high speed internet is not an option, and you have a clear view of the sky, then this is a great choice. If you travel, you might even enjoy the "Starlink for RVs". If you already have a fast internet connection, this won't give you anything more. Well, except for some really cool technology.

Geoff, if you haven't heard of these sites already, here are a couple sites that show the locations of Starlink and other satellites and their rise on the horizon time. On the first site, use the gear at the top to set your location and then it will show the satellites that are in range to communicate with your antenna.

*Neither site is not affiliated with Starlink or SpaceX.

The second site shows the rise of the satellites in text for your location.

Snow on the dish will be a problem. You will need to get upon roof and brush off the snow in the winter.
Also, heavy rains / storms may cause some issues.

About 25-30 years ago when everyone had dial up Internet, I install the Hugh's Dish on my roof. It worked great except during heavy snows. As I remember, the dial up phone speeds were about 1-2kbps. and the Hugh's system was 100-200 kbps. It is good to see the satillite speeds have increased.

Anyway, glad to see u have Internet connection.

Hi Leon - the Starlink settings shows a "snow melt" setting which is on by default, so I don't anticipate it being an issue.

I love mine! It's great for my remote cabin. Faster than my internet in town. Thinking of switching to Starlink for my home.

Thanks for the review. I'm on the waiting list. Currently I have wireless internet, the tower is about 1/2 mile from my house and I'm paying $54.11 per month. I use Ookla for my speed test. Just now I had 3.47 Mps down and 1.25 Mps up. I'll be testing possible location using the portable base to determine if I need extra cable and base type.

Thank you for the review. I've been curious about it.

I’ve had StarLink about a month and it’s the best!!