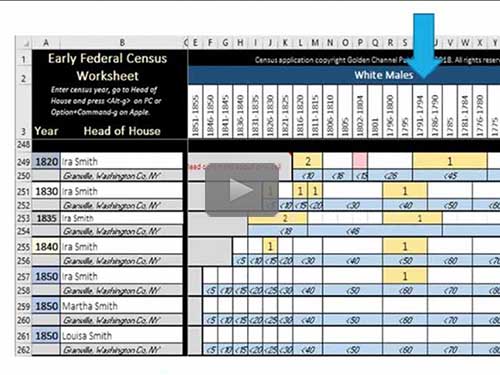 The recording of today's webinar by The Board for Certification of Genealogists and Denise E. Cross, MSLIS, CG, "They Had Names: Identifying Children Represented by Tick Marks in Pre-1850 Censuses" is now available to view at www.FamilyTreeWebinars.com/BCG for free for a limited time.

Early nineteenth century censuses represented children in a household with nameless tick marks in gender and age categories. Their identities can be discovered despite the absence of birth records by using the tick marks to determine an approximate birth year then build an exhaustively researched FAN for the head of household. Correlation tools, geographic proximity in land records and later censuses, and ruling out same named individuals, all provide the indirect evidence to give names to the tick marks.

If you could not make it to the live event or just want to watch it again, the 1 hour and 25 minute recording of "They Had Names: Identifying Children Represented by Tick Marks in Pre-1850 Censuses" is now available to view in our webinar library for free for a limited time. If you have a webinar membership, it is available anytime. 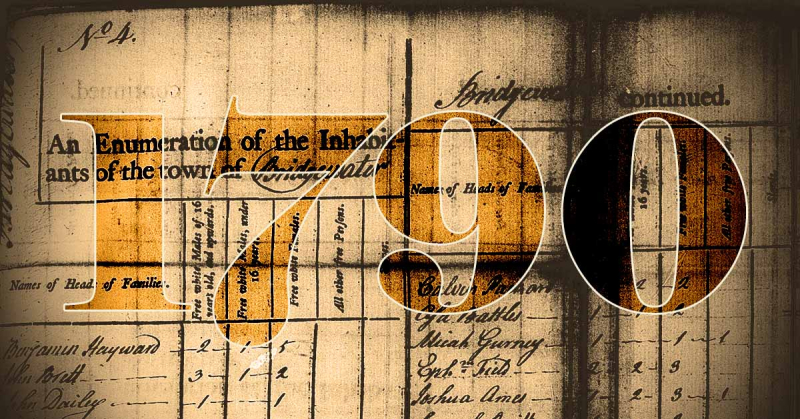 Census records are one of the most important resources used by American genealogists. They are often the first records accessed when creating your family tree. Let's take a look back at the very first U.S. Census Day on August 2, 1790.

As the United States began organizing itself into an independent nation, it created what it needed for a democratic government.  Its new constitution’s  Article 1 laid out the legislative branch with Section 2 documenting the method for apportioning members of the House of Representatives. A census would help in this endeavor and guidelines for a regular census of the country’s citizens were written that stated,  “the actual Enumeration shall be made within three Years after the first Meeting of the Congress of the United States, and within every subsequent Term of ten Years, in such Manner as they shall by Law direct.”[1]

In 1790 President George Washington, Vice President John Adams, and Speaker of the House Frederick Muhlenberg authorized
the legislation that created the decennial census in the United States

That framework led to the first decennial census in 1790. Not surprisingly, as the first census conducted by the federal government, it included few guidelines. There were no special forms provided, nor specifications about the size or type of paper to use. The assistant marshals assigned with the task of enumeration were given little guidance into how to collect the data. Although the census ended up having only six questions there was some argument for it to include even more questions for individuals such as their occupation in an effort to gather information for potential needs the young democracy might have such as soldiers for a military. However, not everyone was convinced that collecting additional data was necessary. In particular, James Madison was against more detailed information and dismissed it as “a waste of trouble and supplying materials for idle people to make a book.”[2]

In the end, the 1790 census would collect information that was more statistical. The only reason the head of the household’s name was included in the enumeration count was for organizational purposes. Information collected for each household consisted of the number of:

This census was to be taken in the “original 13 States, plus the districts of Kentucky, Maine, and Vermont, and the Southwest Territory (Tennessee).”[4] Instructions to the enumerators were just 3 pages long and provided general information about the duties in taking an accurate census, fines for making false returns, and payments for enumerating. They were instructed that “the enumeration shall commence on the first Monday in August and shall close within nine calendar months thereafter.”

Other  instructions included who was to be enumerated:

That the marshals of the several districts of the United States shall be, and they are hereby authorized and required to cause the number of the inhabitants within their respective districts to be taken; omitting in such enumeration Indians not taxed, and distinguishing free persons, including those bound to service for a term of years, from all others; distinguishing also the sexes and colours of free persons, and the free males of sixteen years and upwards from those under that age[5]

That first census took 18 months to complete and counted 3.9 million people, a number that President George Washington thought too low but it was good enough for “congress to take its first census apportionment."[6]

You can read more about the history of that first census in History and Growth of the United States Census: 1790-1890 and other reports available from the US Census Bureau website.

Have your found your ancestors in the 1790 U.S. Federal Census? Do you think it's a worthwhile census to include in your research?

Learn more about using census records in your research with these Legacy classes. 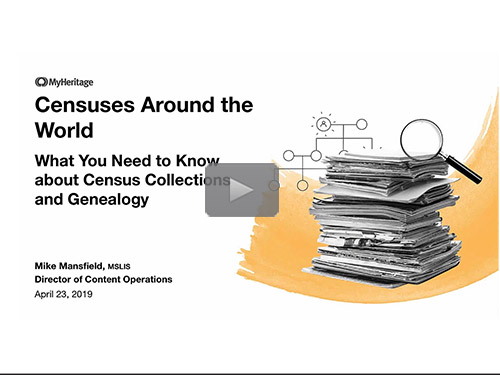 The recording of today's webinar, "Censuses Around the World: What You Need to Know About Census Collections and Genealogy” by Mike Mansfield is now available to view at www.FamilyTreeWebinars.com for free for a limited time.

Explore the incredible census collections we have in the MyHeritage database (U.S., Canada, England, Wales, Ireland, Denmark, etc.) and how you can integrate them into your family history research.
View the Recording at FamilyTreeWebinars.com

If you could not make it to the live event or just want to watch it again, the 1 hour 25 minute recording of "Censuses Around the World: What You Need to Know About Census Collections and Genealogy" is now available to view in our webinar library for free for a limited time.

New "Member Friday" Webinar - Secrets of the US Federal Census – How Did Enumeration Really Work? by Thomas MacEntee

Every Friday we're pleased to offer Legacy Family Tree Webinar subscribers a new bonus webinar just for them!   This Friday enjoy "Secrets of the US Federal Census – How Did Enumeration Really Work?" by Thomas MacEntee. If you're not a member, remember the webinar previews are always free.

Secrets of the US Federal Census – How Did Enumeration Really Work? 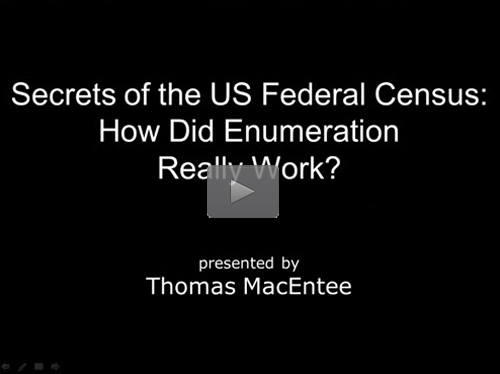 What happens when a “tech guy” with a love for history gets laid off during The Great Recession of 2008? You get Thomas MacEntee, a genealogy professional based in the United States who is also a blogger, educator, author, social media connector, online community builder and more.
Thomas was laid off after a 25-year career in the information technology field, so he started his own genealogy-related business called High Definition Genealogy. Currently Thomas shares many of his articles and videos for free at Abundant Genealogy and also runs the popular Genealogy Bargains and DNA Bargains websites!
Thomas describes himself as a lifelong learner with a background in a multitude of topics who has finally figured out what he does best: teach, inspire, instigate, and serve as a curator and go-to-guy for concept nurturing and inspiration. Thomas is a big believer in success, and that we all succeed when we help each other find success.

See all the webinars by Thomas MacEntee in the Legacy library. 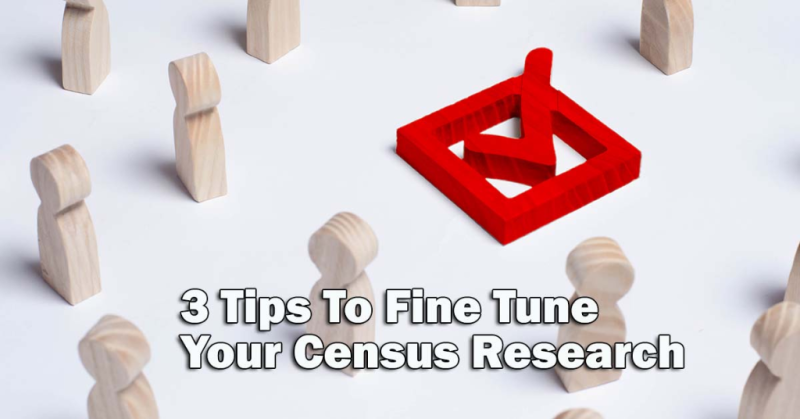 Census  records are some of the first genealogy records  researchers use to begin tracing their ancestors. Tracking an ancestor through the years and generations is exciting and often yields quick results. Once we find an ancestor on one census record, we tend to proceed quickly to the next census record and the next.

Eventually, we can go no further in our census research and are left to wonder - "Now what?"

In our excitement of discovering our ancestors,  we miss vital clues in the census records leading to other helpful records.

The examples in these tips are based on U. S. census research. However, the tips themselves are applicable to all census research regardless of the country.

Tip #1 - Read and make note of information under every column heading.

Each census recorded different information. Later census records can contain quite a bit of detail on our ancestors. Beyond an individual's name, age or birth date make note of things such as:

Tip #2 - Study the individual household and determine if the information recorded in the census makes sense.

Tip #3 - Use that census records to learn more about your ancestor's community.

To break down genealogy brick walls and progress our research, genealogy researchers must  understand the community where our ancestors lived.

Find an in-depth look of the 1910 U.S. census in What Is The 1910 Census Telling You About Your Ancestor?

Spend time in the census records this week.  Take your time.

What might you have missed in your previous research?

Learn even more from the many census classes in the Legacy Library!

Posted by Lisa Lisson in Census, Tips from the Experts | Permalink | Comments (5)